Did the Jewish People Have the Right to Return to Israel After So Long?

Posted on September 3, 2012 by Stuart Dauermann

Some, like historian Arnold Toynbee, argue that the Jewish people have no right to return to Palestine after so long in exile. How are we to approach and answer this question?  In answering this in the second chapter of his A Durable Peace: Israel and Its Place Among the Nations, Benjamin Netanyahu deals with two related issues.

First Issue – How can we say that Israel retains the right?

Returning then to a comparison between Spain and the Jewish people of Palestine, it took Spain eight centuries to regain sovereignty from the Arab invaders, and the Jews twelve centuries. The Spanish means was fire and blood, while The Jews sought to return peaceably, reclaiming the land, purchasing their own land from absentee Arab landlords in Cairo and Damascus. The land which the the Spaniards regained had been developed by the Arabs who had occupied it: the land which the Jews regained had lain fallow.

What Spain and Israel had in common was the continued existence of a people whose country had been conquered who had never given up their rights to their land, with both the Spaniards and the Jews having persistent aspirations that their people would eventually be restored to their natural homeland.

Many today complain that the State of Israel was a new invention involving the usurping of Arab rights and land in order for the West to assuage their consciences after the suffering of the Jews during the Holocaust.  The facts speak otherwise,  The rhythm of exile and return had been long established for many centuries prior to the Holocaust, which served as a final impetus but certainly not and never the sole impetus for Jewish return.

Netanyahu’s grandfather, Rabbi Nathan Mielkowsky of Blessed Memory was a participant in Herzl’s early Zionist Congresses.  At the very beginning, the position was proposed that the Jews might establish a homeland elsewhere, including Uganda. Some felt that any homeland was good enough. Mielkowsky was among that very vocal majority that voted down “The Uganda Plan.”  His son, Netanyahu’s father, asked him if they had turned down the plan because they thought the British would not see it through.  Here was his poignant answer, which says so much that makes my Jewish heart sing:

On the contrary. We believed that the British would be faithful to their word. In those days England enjoyed a great reputation among the Jews. But it was precisely because we believed that the project could be carried out that we were all the more opposed to it. For so many centuries the Jewish people had made so many sacrifices for this land, had shed their blood for it, had prayed for a thousand years to return to it, had tied their most intimate hopes to its revival–we considered it inconceivable that we would now betray the generations of Jews who had fought and died for this end. It would have rendered the whole of Jewish history meaningless. We had to oppose it.

Yes, it makes me proud to be a Jew.

This longing for the Land never left the Jewish soul. In the early 12th century, writing in Muslim Spain, the great poet Yehuda Ha-Levi put it this way in his “In Remembrance of Jerusalem”:

Beautiful land,
Delight of the world,
City of Kings,
My heart longs for you from the far-off west.
I am very sad when I remember how you were.
Now your glory is gone, your homes destroyed.
If I could fly to you on the wings of eagles,
I would soak your soil with my tears. 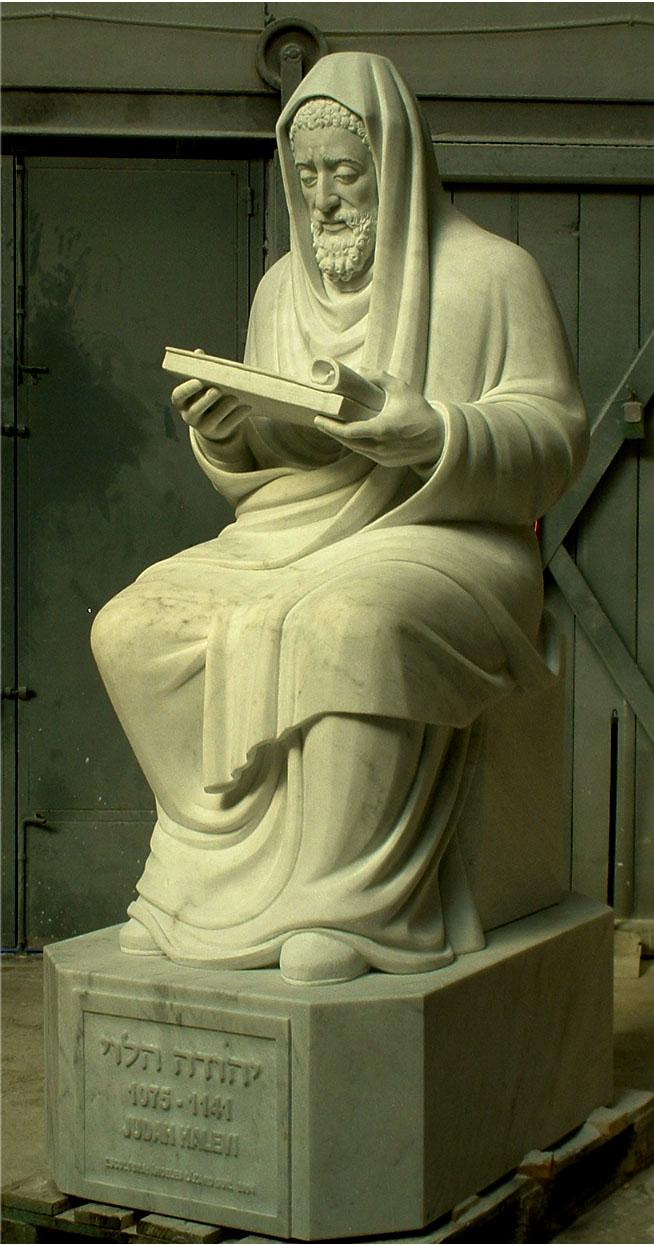 A Gorgeous Statue of Yehuda Ha-Levi, of Blessed Memory