Making Money Off Of Jewish Souls

A little over a year ago,  my younger son kept a promise I had extracted from him. He was spending a year in Germany studying voice, and I made him promise he would visit a concentration camp site before returning to the U.S.  He kept this promise by walking from somewhere in the environs of Munich to Dachau, on a hot summer’s Sunday, with a backpack on his back.

Along this horrific Via Dolorosa there were signs indicating how Jews had marched these same streets on a journey of no return. 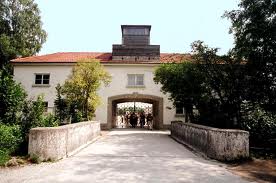 He reported to me how transformational the experience was for him, and how, upon arriving at the gates of the camp he found them closed, since this was a Sunday.  He told of how he barely resisted the urge to ask an octogenarian woman he saw outside a nearby home, “What did you do when you saw these thousands upon thousands of people being led to their deaths?”

One comment he made to me left an indelible impression.  He remarked how things had not changed much. Whereas formerly the environs of Dachau made money off of Jews by using them as slave labor, now they were making money off of Jews by selling souvenirs and servicing the tourists who come to visit there.

It is also chilling to consider how some, and although surely not all, who missionize the Jewish people also engage in making money off of Jewish souls.  I see this to especially be a danger when mission agencies seek to please their mailing lists by delivering Jews to their churches, therefore receiving budget support in response. It comes perilously close to an exchange: Jewish souls for church money.

Let’s be sure to be fair here.  There are many other motivations which bring people into this area of service, motivations of self-sacrifice, love, respect and faith, and many who have engaged in such work are icons of unselfishness.  Still, the danger remains of engaging in a chilling quid pro quo. Always, for those engaged in promoting Yeshua faith among my people, there is the danger of becoming indifferent or even hostile to Jewish communal continuity and covenantal life. Whenever those missionizing the Jews see Jewish communal and covenantal community as of little, no, or secondary importance, they risk becoming merchandisers of Jewish souls.   I suggest instead that those who Yeshua to Jewish people invest equal energies in encouraging, facilitating, and insisting that these Jews  root themselves and grow in Jewish covenantal life and community.

This becomes especially hard, actually impossible to do, when those who missionize are themselves assimilated Jews who have forsaken Jewish covenantal life and community. They can scarcely call others to live the kinds of Jewish lives they themselves have abandoned.  It is also hard to encourage new Yeshua-believers to live in Jewish covenantal life and community for those whose support depends upon churches that will be estranged if the missionaries perpetuate Jewish life and community by encouraging Jews who come to Yeshua faith to live Jewish lives with other Jews.  Happily, some churches rightly recognize that of course Jewish covenantal and communal life is no threat to the unity of the people of God.  Still, these are in a minority, and very few mission-minded churches understand this to be an appropriate priority. They will instead see such Jewish covenantal and communal loyalty as spiritually retrogressive, divisive, and at best an option to be allowed but not encouraged.  Sad.

It is a worthy goal for Messianic Jews to do all they can to educate Christians of the propriety and beauty of Jewish Yeshua believers living such covenantal and communal lives.  It it is also worthwhile, and a passion of mine, to challenge the missions culture to reexamine these issues, long ago foreclosed in their ranks.

As things are now, the danger for those who missionize, as in many areas of life is in succumbing to the golden rule: he who has the gold makes the rules.

May God deliver us all from being ruled by such tawdry motivations.

7 Responses to Making Money Off Of Jewish Souls