Love, Hate and the Greatest Commandment 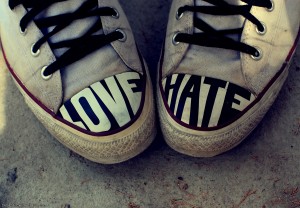 Why do we read this parasha every year after Tisha B’Av? Thought we were finished with all of the pleading already? This week, we spent a hungry evening on the floor reading Lamentations, remembering the horrific tragedies that have beset our people on Tisha B’Av: the destruction of the First & Second Temples, our expulsion from England and Spain, the beginning of World War I, the Chelmniecki pogrom in Ukraine, the beginning of deportations from the Warsaw Ghetto, a terrorist bombing at a JCC in Argentina … Indeed, I thought we were finished with all of the pleading. No, the time has come again to read Moses’ famous last words, beginning with “and I pleaded.” In this portion, Moses warns of the consequences of failing to hold up our end of the bargain – observing God’s commandments. If we fail to hear and to obey, we will be driven out from the Land of Israel and become scattered among the nations. Why did our sages choose the Shabbat following Tisha B’Av for the reading of this portion?

According to tradition, it was the corruption of our people that led to the destruction of the Second Temple (see b. Yoma 9b). “Baseless hatred” is the buzzword that’s meant to describe our undoing, and seemingly characterized Jewish national life during the Second Temple period. But what is baseless hatred?

It seems awfully vague and wholly unrelated to the minutiae of Jewish life – laws regulating our food, clothing, work, study, marriage, child rearing (even bathing habits!). What does baseless hatred have to do with God’s commandments?

The greatest commandment, according to Yeshua, is the love of God and the love of others (cf. Leviticus 19:6). Hillel offered a similar assessment. When asked to summarize the whole of Torah while standing on one foot, he said, “what is hateful to you do not do to another. All the rest is commentary.” The commentary of Yeshua and Hillel seem to draw a correlation between one’s love for God and one’s ability to love others. If love of God and love of others are intrinsically linked to each other, then “baseless hatred” of other people would imply a failure to love God, as well.

Indeed, the phrase “baseless hatred,” or sinat chinam, is literally “the hate of their chen.” A person’s chen is the quality that makes her unique. The part of her that is betselem Elohim, in the image of God. To commit sinat chinam is to deny a person’s right to exist and to believe that person has nothing valuable to contribute to the world. Sinat chinam, then, is the condition and the action of ultimate arrogance.

If I assume that you have nothing of value to contribute to this world, then my thoughts and deeds make the statement that God doesn’t know what he is doing in creating and sustaining you. When I perceive a person made in God’s image as worthless and treat her accordingly, I violate the greatest commandment to love God. In violating this commandment, I may as well have nullified the whole of Torah.

Perhaps it is fitting that, only days after fasting in memory of the destruction of the Temple, we are reminded of Moses’ words warning us about the very behaviors that bring about these sorrows. We violate the whole of Torah if we do not love each other and act accordingly. And if we violate the whole of Torah, we lose our entitlement to life in the Land. The challenge of Jewish life is to find the chen within each person, no matter how distasteful they seem. In acknowledging the dignity of people who seem to have no valuable purpose in this life, we honor the ultimate wisdom of God and God’s confounding yet generous act of creation. To love others is to love God. This is the whole of Torah.

Chocoholic, jazz head ... prone to rants, and a professional pitbull. I married a terrific guy who happens to be a rabbi, so I guess that makes me a rebbetzin. Who saw that one coming? My grandparents survived the Shoah and spent their lives in the service of others. On my best days, I walk in their footsteps.
View all posts by Monique →
This entry was posted in Uncategorized and tagged nexgen, Pieces of Parasha, Spirituality, torah. Bookmark the permalink.