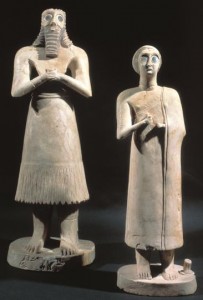 I love the book of Genesis! Not only as a religious Jew, but as an academic. I value the theological understandings gleaned through thousands of years of Jewish interpretation. However, I also value the rich tradition of Genesis from its historical and literary understanding, which is also teaming with Ancient Near Eastern allusions, language, and places.

The Bible is a product of the Ancient Near East. When we view the Bible also from the perspective of literature, we can appreciate the context out of which it was birthed, the particulars of the people who brought it forth, and its similarities to other ANE texts.

Although the creation account in Genesis differs from other creation accounts and has its own unique characteristics, there are also many ANE allusions. The idea of “tohu v’vohu,” of the earth being in utter chaos prior to Creation, of the “firmament (or dome)” above the earth, the separation of the “upper” and “lower” waters, and of course even the concept of the Garden of Eden. Interestingly, the word Eden itself is not Hebrew. It is a borrowed Sumerian word that finds its way into the Bible through Akkadian influence.

Ancient Sumer (the Biblical “Shinar”) was the cradle of civilization. It is the earliest known complex civilization in the world and spanned over three-thousand years – from the 6th millennium to the 2nd millennium BCE. Sumer was the birthplace of complex society, the wheel, and of agriculture. It was also the birthplace of writing (ca. 3500 BCE).

The heart of ancient Mesopotamia is between the two great rivers of the Tigris and Euphrates, which are mentioned in Genesis as two of the rivers bordering the Garden of Eden. Several of these earliest cities are mentioned in the first three Torah portions – Bavel, Uruk (Biblical Erech), Akkad, Nineveh, and Ur (just to name a few). The biblical patriarch Abraham, himself, came from Ur in Southern Mesopotamia.

The flood story of Noah is also interestingly paralleled in earlier ANE versions; however, I will not expand on this as my friend and colleague, Derek Leman, has blogged on it extensively in the past. 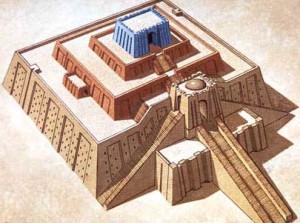 Even the idea of the Tower of Babel is believed to be an allusion to the great Mesopotamian temples, known as Ziggurats – which were massive stepped pyramid temple structures. Ziggurats were places where priests offered prayers, offerings, and sacrifices to the Mesopotamian pantheon of gods.

As a religious Jew I obviously attribute theological truth to Genesis as Scripture and I absolutely believe HaShem literally created all that exists. However, it is important that we also understand Genesis for what it is, and what it is not. We should not try to read especially the creation account too literally. It was never intended to be a scientific account of creation (although it may contain scientific and historical information). Rather, Genesis is a theological account of Creation. As I mentioned last week, Genesis is meant to directly establish God as the sovereign of the universe. As such, the Torah speaks only in general terms to illustrate that nothing came into being except at God’s command. Unlike other origin stories circulating around the Ancient Near East, the Biblical account makes no attempt to explain the origins of God, or try to persuade the listener of God’s existence. The existence of God, in Judaism, is an axiomatic fact. Therefore it immediately jumps to the explanation of God’s creation of heaven and earth, and to what God expects of His creation.

I'm a Rabbi, writer, thinker, mountain biker, father and husband ... not necessarily in that order. According to my wife, however, I'm just a big nerd. I have degrees in dead languages and ancient stuff. I have studied in various Jewish institutions, including an Orthodox yeshiva in Europe. I get in trouble for making friends with perfect strangers, and for standing on chairs to sing during Shabbos dinner. In addition to being the Senior Rabbi of Simchat Yisrael Messianic Synagogue in West Haven, CT, I write regularly for several publications and speak widely in congregations and conferences. My wife is a Southern-fried Jewish Beltway bandit and a smokin' hot human rights attorney... and please don’t take offense if I dump Tabasco sauce on your cooking.
View all posts by Rabbi Joshua →
This entry was posted in Uncategorized and tagged Ancient Near East, Archaeology, Bible, Genesis, torah. Bookmark the permalink.

3 Responses to Genesis in Context