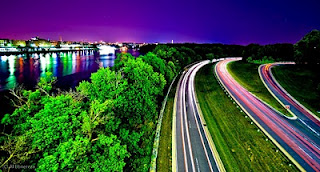 Parashat Beshalach is unique in that it begins by telling us what God did NOT do.

God did not guide them to the highway that goes through the land of the Philistines, because it was close by – God thought that the people, upon seeing war, might change their minds and return to Egypt. Rather, God led the people by a roundabout route, through the desert by the Sea of Suf. –Exodus 13: 17- 18

Rather than guiding the Jewish people quickly down the well-traveled highway to present-day Gaza, God chose the less obvious route, leading to an eventual entry to the Land (forty years later) over the banks of the Jordan River. The text says that the children of Israel departed Egypt “fully armed,” and yet God led them away from battle. Why is this? It seems that before the people even began their journey out of Egypt, God already knew they lacked fortitude for the challenges ahead.

Much has been said about the generation of Jewish people that participated in the exodus from Egypt. Ibn Ezra discusses at length the “slave mentality” that left a generation of liberated slaves psychologically incapable of facing direct combat with their enemies. After all, it is this generation that later believes the bad report of the ten spies, and is prohibited from entering the Land as a result of their lack of faith in God’s promises. Later in this very parasha, these former slaves doubt God’s ability to meet their most basic needs – for protection from violence, water, and food – despite repeated miracles demonstrating God’s power.

Maimonides argues that God chose an indirect route in order to toughen the people and prepare them to enter the Land. In his Guide for the Perplexed, he says, “Ease destroys bravery while trouble and concern about food create strength. This strength that the Israelites gained was the ultimate good that came out of their wanderings in the wilderness.” (3:24) This would make sense, but for the fact that this generation of Jews never had the opportunity to exercise their supposed bravery. It was their children(who did not witness the miracles of Beshalach) who entered and conquered the Land.

It seems that God chose this route in order to demonstrate something fundamental about the way He works through the Jewish people and through history. It is not human ingenuity or warfare that produces redemption. Indeed, the people of Israel are given their freedom without the need to lift a single sword. It is God who turns the seabed into dry ground, who turns bitter water sweet, who rains manna and quail from heaven, and who routs the Amalekites’ attempt at blood sport. God admits that this choice has a didactic purpose when he explains to Moses that, “I will win glory for myself … and the Egyptians will realize at last that I am the LORD.” (14:4)

It often strikes the reader as a shame that the generation that witnessed awe-inspiring plagues and miracles struggled so vocally with their ability to rely on God for basic provisions. But it is not for our own satisfaction that the Torah itemizes their every complaint. Instead, the Torah reminds us that, regardless of our current position (whether it be characterized by relative affluence or relative deprivation), we remain dependent on God for our every need. Even those who are unburdened by a “slave mentality” are ultimately unable to accomplish anything of significance without God’s direct intervention. And that ultimately, God is working out His plan to redeem all creation through the trials and challenges faced by the Jewish people. By continually redeeming us, God tells the nations of the world that He is the LORD. Our highest calling as a people is not to toughen our own hides, but to place our trust in God. Paradoxically, it is through our uniquely vulnerable exercise of faith that God demonstrates His might.

Chocoholic, jazz head ... prone to rants, and a professional pitbull. I married a terrific guy who happens to be a rabbi, so I guess that makes me a rebbetzin. Who saw that one coming? My grandparents survived the Shoah and spent their lives in the service of others. On my best days, I walk in their footsteps.
View all posts by Monique →
This entry was posted in Uncategorized and tagged Exodus, moses, Pieces of Parasha, torah. Bookmark the permalink.

1 Response to The Road Less Traveled