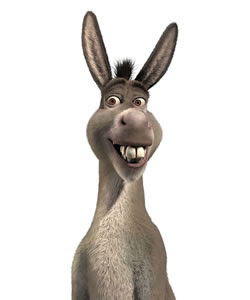 Parashat Balak tells the story of a non-Jewish prophet (Bilaam) who was hired to curse the people of Israel. Multiple times Bilaam attempted to curse Israel, and each time G-d caused him to speak a blessing instead of a curse.

In the middle of the parasha, Bilaam sets off on his donkey in another attempt to curse Israel. However, a strange thing happened. G-d sent an angel to bar the way of Bilaam. Upon seeing the Malach HaShem, the Angel of HaShem blocking its path, three times the donkey refrained from continuing and each time Bilaam beat the donkey. After the third time, G-d enabledthe donkey to speak, responding, “What is it I have done to you that you beat me these three times? (Num. 22:28)” It was not until G-d enabled Bilaam to see the Malach HaShem that Bilaam truly realized what was happening.

So what can we learn from this? Often many of us are like Bilaam. For one reason or another we become caught up in our own desires, blind to G-d’s purposes, and to the needs of the community around us. And when anyone or anything attempts to keep us from doing something in pursuit of those desires, we beat them too. So in the end, we are hurting not only ourselves, but those around us without any consideration.

And yet, other times in life we feel like the donkey. We are working so hard to do the right thing, and to avoid the entrapments along life’s path. However, it seems life just keeps beating us and beating us despite our best attempts. Like the donkey in the parasha, many of us often feel like screaming out, “Why do you continue to beat me?”

In either situation, we are letting our circumstances get the best of us. When we lose faith, lose hope, and lose sight of where HaShem is leading us, we end up getting beaten down by the world around us. We need to be people of clear vision. After all, the book of Mishlei (Proverbs) states, “Trust in HaShem with all of your heart, and lean not on your own understanding. In all your ways acknowledge G-d, and G-d will make your path straight (3:5-6).”

May all of us be blessed to truly listen and follow G-d’s path for our lives. May we be followers of HaShem’s Torah, and heralds of the message of Messianic redemption. May we no longer kick against the goads, lost and beaten down by our own misguided desires. Rather, may each of us merit a prophetic vision for our unique purpose, and may we all witness the fullness of Israel in Messiah Yeshua.

1 Response to A Talking Donkey?