Praying With Their Feet 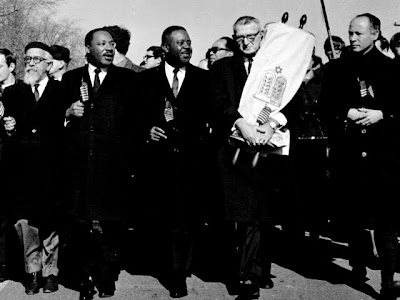 Tomorrow, and really all of this weekend, we remember the inspiring legacy of Reverend Dr. Martin Luther King, Jr. and his role in not only the civil rights movement in America, but for his contributions to humanity, and his leadership to a generation.

But why discuss MLK on a Jewish blog?

Many people today are unaware that Jewish individuals and clergy played a tremendous role in the civil rights movement. One of the most prominent Jewish figures in this struggle was none other than Rabbi Dr. Abraham Joshua Heschel – one of the greatest Jewish theologians of our time (Heschel is pictured at far left in the above picture, along with Rabbi Maurice Eisendrath (carrying the Torah), and Rabbi Everett Gendler).

In a tremendous article on the two great figures, Dr. Susannah Heschel (Heschel’s daughter) points out that “Heschel and Dr. King marched arm in arm at Selma, prayed together in protest at Arlington National Cemetery, and stood side by side in the pulpit of Riverside Church.”

According to Susannah Heschel:

“The relationship between the two men began in January 1963, and was a genuine friendship of affection as well as a relationship of two colleagues working together in political causes. As King encouraged Heschel’s involvement in the Civil Rights movement, Heschel encouraged King to take a public stance against the war in Vietnam. When the Conservative rabbis of America gathered in 1968 to celebrate Heschel’s sixtieth birthday, the keynote speaker they invited was none other than King. When King was assassinated, Heschel was the rabbi Mrs. King invited to speak at his funeral.”

For Heschel, the march from Selma had tremendous spiritual significance. Following the march, he wrote:

“For many of us the march from Selma to Montgomery was about protest and prayer. Legs are not lips and walking is not kneeling. And yet our legs uttered songs. Even without words, our march was worship. I felt my legs were praying.”

Here is also a great video clip discussing the special relationship between Reverend King and Rabbi Heschel (view HERE), and comments from those close to King about their relationship, and the influence Heschel had upon them and the civil rights movement.

And for more about Abraham Joshua Heschel check out this great video and article from PBS.

On this day, as we remember the legacy of Martin Luther King, Jr., we also recall his friend and colleague, Abraham Joshua Heschel – a holy pair who truly learned to pray with their feet – and taught others to do so as well.

I'm a Rabbi, writer, thinker, mountain biker, father and husband ... not necessarily in that order. According to my wife, however, I'm just a big nerd. I have degrees in dead languages and ancient stuff. I have studied in various Jewish institutions, including an Orthodox yeshiva in Europe. I get in trouble for making friends with perfect strangers, and for standing on chairs to sing during Shabbos dinner. In addition to being the Senior Rabbi of Simchat Yisrael Messianic Synagogue in West Haven, CT, I write regularly for several publications and speak widely in congregations and conferences. My wife is a Southern-fried Jewish Beltway bandit and a smokin' hot human rights attorney... and please don’t take offense if I dump Tabasco sauce on your cooking.
View all posts by Rabbi Joshua →
This entry was posted in Uncategorized and tagged community, ethics, Heschel, holiness, interfaith dialogue, Jews in the News, Prayer, reconciliation, social justice, Spirituality, tikkun olam. Bookmark the permalink.

1 Response to Praying With Their Feet