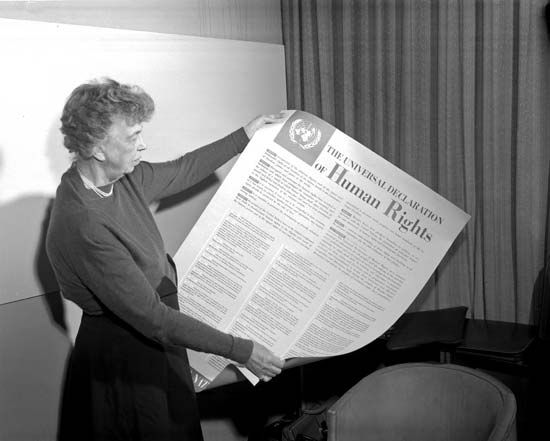 Today marks the 66th anniversary of the signing of the Universal Declaration of Human Rights (UDHR). Led by First Lady Eleanor Roosevelt, the chair of the United Nations Human Rights Commission, 48 of the most powerful countries in the world signed this document, for the first time in history, agreeing on a set of common principles that would govern their respect for the rights of individuals. Included in the UDHR’s declarations were the following sentiments:

Is it any coincidence that the creation of UDHR falls in the same year as the birth of the State of Israel? Of course it’s not just a mere coincidence! Let’s go back in our heads to 1948 … the Western world was emerging from the worst bloodbath of all history. 6 million people were murdered under the noses of the continent of Europe for the crime of being Jews … and nary a peep was uttered in protest by the citizens of Europe. Twenty million were murdered by Stalin. Countless more soldiers lost their lives in the two bloodiest wars in history – World War I and World War II.

And it was a host of “isms” that fueled these wars. Nationalism, racism, nativism, isolationism, Aryanism. In short, human nature at its very worst.

It is no mere coincidence that the state of Israel and the UDHR were brought to life in the same year. The Western world, in begrudgingly authorizing the establishment of the first Jewish state, and in enthusiastically embracing the principles of the UDHR … was attempting a form of penance, and carving out a new and hopefully brighter vision for the future.

But almost seventy years later, how far have we come? Does the world we live in reflect the UDHR’s vision for the future? Does our own government adhere to its principles? Sadly, it does not.

The genocide in Rwanda sparked an even more devastating conflict in the Congo (which is still ongoing), where six million people (mostly women and children … and a whole lotta refugees) have been murdered in the past 12 years. Genocide still rages in Darfur. Globally, it’s estimated that 27 million people are held in slavery – at least 17,000 of them are enslaved in the United States. 1 in 3 women faces some form of gender-based violence in her lifetime – rape, domestic violence, forced marriage, honor killing, female genital mutilation.

No. 66 years later, what has really changed? I’ll tell you what’s changed. Our capacity and our obligation to act has changed. The age of iPhones, blogs, “the internet,” cheap international travel … these things have brought news of atrocities, genocide, and abuses of power into our living rooms.

Fortunately … these tools of communication have also brought our living rooms into the global stage. As individuals, we have the power to speak up about injustice, to lobby our government for change, to pursue shareholder activism to stop corporate abuse, to send, with the click of a button, lifesaving resources and funds to human rights activists.

And as Jews, we have the call of Hashem. To seek justice, to defend the widow and the orphan, to free the captives, to comfort those who suffer … G-d commands us to act, because acting in the face of injustice is the only way to effectively remember.

Sixty-six years later, there is still plenty of work to be done. Let’s commit as a community to do more of it.

Chocoholic, jazz head ... prone to rants, and a professional pitbull. I married a terrific guy who happens to be a rabbi, so I guess that makes me a rebbetzin. Who saw that one coming? My grandparents survived the Shoah and spent their lives in the service of others. On my best days, I walk in their footsteps.
View all posts by Monique →
This entry was posted in Uncategorized and tagged human rights, social justice, tikkun olam. Bookmark the permalink.