Abraham and the Amidah 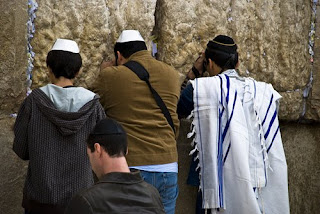 In the opening words of this week’s Torah portion, G-d speaks to Abraham, saying:

At the age of seventy-five, Abraham left his home in modern day Iraq, and traveled all the way to the land of modern Israel. Included in the command to leave his homeland was also a promise that G-d would multiply Abraham’s descendants, and that they would inherit a new homeland.

This must have come as quite a shock. At an age where Abraham should have been settling down and enjoying retirement, G-d basically exiles him from his place of comfort. The place he had always known. The place where he speaks the language, knows the customs, and knows all his neighbors.

Through an act of great faith Abraham did it. He left all he had ever known and set out to a place he was not even sure of yet. But he trusted G-d would be with him, and would eventually reveal where this place would be. He trusted the calling.

What makes this act of faith even more remarkable is the fact that Abraham also trusted G-d’s promise of children. At the age of seventy-five, like most of us, he must have finally given up on any hope of a child.

Throughout the difficult years that followed – battles, wanderings, and expulsions – Abraham remained convinced that G-d would remain faithful to his promise. That is – until the day his faith gave out.

One day, at the age of ninety-nine – twenty-four long years later – G-d appeared again to Abraham and reemphasized the promise of blessing. That was enough! Abraham could not take it any longer! Abraham threw himself to the ground and scoffed:

Shall a child be born to a hundred-year-old man? And shall Sarah – a ninety-year-old woman – give birth? (Genesis 17:17)

By this point Abraham’s faith was so weak that it took an additional appearance by G-d found in next week’s parasha to finally convince him that he would indeed have a son (see Genesis 18:10-15).

In the end – in spite of all the trials – Abraham and Sarah did have a son. It took an exile to bring a blessing. So it is often with us. We often need to be removed from our comfort zones in order to see spiritual fruit in our lives.

When we stand before G-d at the beginning of the Amidah, it is traditional to take three steps back. We exile ourselves from G-d’s presence. It is G-d’s way of telling us, “Lekh lekha … get yourself out of that place of comfort … that place of stagnancy …” So that in the end, when we take three steps forward, like Abraham, we will step into that place of destiny, blessing, purpose and direction.

I'm a Rabbi, writer, thinker, mountain biker, father and husband ... not necessarily in that order. According to my wife, however, I'm just a big nerd. I have degrees in dead languages and ancient stuff. I have studied in various Jewish institutions, including an Orthodox yeshiva in Europe. I get in trouble for making friends with perfect strangers, and for standing on chairs to sing during Shabbos dinner. In addition to being the Senior Rabbi of Simchat Yisrael Messianic Synagogue in West Haven, CT, I write regularly for several publications and speak widely in congregations and conferences. My wife is a Southern-fried Jewish Beltway bandit and a smokin' hot human rights attorney... and please don’t take offense if I dump Tabasco sauce on your cooking.
View all posts by Rabbi Joshua →
This entry was posted in Uncategorized and tagged Pieces of Parasha, Prayer, Spirituality, torah. Bookmark the permalink.

2 Responses to Abraham and the Amidah