This past February, the congregation where I serve as the Senior Rabbi, Ahavat Zion Messianic Synagogue in Beverly Hills, CA, celebrated its 40th anniversary with a special gala dinner featuring special guests, joyous music and historical trivia into the congregation’s past forty years. This momentous occasion brought together current and past members, as well as other special guests, for an evening of recollection, celebration and vision casting toward the future. The event also turned out to be an excellent opportunity for outreach as there were many friends, family and colleagues present who were introduced to the community for the first time. Many people expressed an interest in finding out more about our congregation and a few people have already become actively involved. 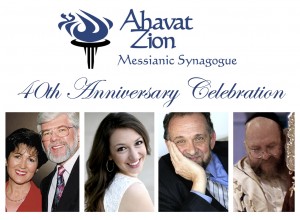 Ahavat Zion was originally founded in 1973 under the name Beth Emmanuel. However, in 1978 the congregation reincorporated and changed its name to Ahavat Zion. As the oldest Messianic congregation on the West Coast, and one of the seven oldest in the entire country, Ahavat Zion has been at the forefront of the Messianic Jewish movement, serving as a flagship congregation, a think-tank for innovative ideas and services, and a spiritual home for those who are Jewish or intermarried. It has now been a few months since the 40th Anniversary Celebration and I continue to receive overwhelmingly positive feedback … from the warmth and friendliness of the evening to how nice it was to especially recognize the contributions of significant members throughout the congregation’s history. This was definitely a significant milestone I will never forget.

I'm a Rabbi, writer, thinker, mountain biker, father and husband ... not necessarily in that order. According to my wife, however, I'm just a big nerd. I have degrees in dead languages and ancient stuff. I have studied in various Jewish institutions, including an Orthodox yeshiva in Europe. I get in trouble for making friends with perfect strangers, and for standing on chairs to sing during Shabbos dinner. In addition to being the Senior Rabbi of Simchat Yisrael Messianic Synagogue in West Haven, CT, I write regularly for several publications and speak widely in congregations and conferences. My wife is a Southern-fried Jewish Beltway bandit and a smokin' hot human rights attorney... and please don’t take offense if I dump Tabasco sauce on your cooking.
View all posts by Rabbi Joshua →
This entry was posted in Uncategorized and tagged Ahavat Zion, AZS, community, Messianic Jewish life, Messianic Jews, Messianic Judaism, Messianic Synagogue. Bookmark the permalink.