A Tabernacle, Furniture, and the Presence of God 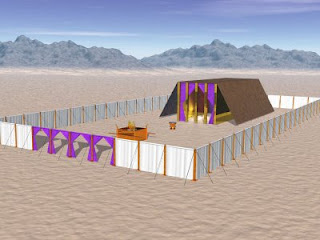 This week’s Torah portion gives further instructions concerning the building of the Mishkan (the Tabernacle) and its furnishings. This raises an interesting question: For if the Bible’s overall theme is about G-d’s relationship with humanity through the Jewish people, then why is so much attention given to the details of objects? The answer is deeply connected to the purpose of the Mishkan, its furnishings, and the manifest presence of the Divine.

The Mishkan as Representation of G-d’s Presence

The Hebrew word for the Tabernacle is Mishkan (משכן ), which means “to dwell” or “dwelling.” It comes from the root, shachan (שכן ), which is also related to the word Shechinah (שכינה ), meaning the manifest presence of G-d. They are all based on the same Hebrew root. ThTherefore, even the word Mishkan denotes HaShem’s presence (the Shechinah) that would dwell among the people of Israel.

The Jewish sage, Ibn Ezra, comments that “while Moses was still on Mt. Sinai, G-d commanded him concerning the Tabernacle so that it would be a permanent place among the people for the glory that had rested on the mountain.” The author of Revelation writes that this continued presence of God will continue beyond the second coming of the Messiah and even into the “New Jerusalem.”

This idea is further supported by Ibn Ezra, who states: “While Moses was still on Mt. Sinai, G-d commanded him concerning the tabernacle so that it would be a permanent place among the people for the glory that had rested on the mountain.” As such, the Tabernacle served as a tangible assurance of the bond that G-d had forged with the people of Israel at Mt. Sinai.

Each of us is a Portable Tabernacle

According to the great medieval Torah commentator, Abravanel, “When the Torah speaks about the Mikdash, it is not only describing a sacred building in which worship takes place but it also has in mind the body of each human being. That is to say, each human being is a sacred sanctuary.”

Isn’t this exactly what the Shaliach Sha’ul wrote?

“Or do you not know that your body is a temple for the Holy Spirit who is in you, whom you have from G-d, and that you are not your own? For you have been bought with a price: therefore glorify G-d in your body (1 Cor. 6:19-20).”

The ultimate example of this is Yeshua himself, who identified himself as an incarnation of the Temple:

“Yeshua answered them, ‘Destroy this Temple, and in three days I will raise it up.’ The Judeans then said, ‘It took forty-six years to build this temple, and will You raise it up in three days?’ But he was speaking of the temple of his body (John 2:19-21).”

This is a powerful image! The same presence of G-d that was revealed to Moshe at Mt. Sinai, and which dwelled in the Sanctuary, resides within us. Each one of us, therefore, is a dwelling place for the presence of HaShem. May we, as followers of Yeshua, our Righteous Messiah, continue to live lives aware of G-d’s manifest presence, and may we continue to work to bring that Presence to the rest of the world – thereby affirming our calling to be a Light to the Nations.

I'm a Rabbi, writer, thinker, mountain biker, father and husband ... not necessarily in that order. According to my wife, however, I'm just a big nerd. I have degrees in dead languages and ancient stuff. I have studied in various Jewish institutions, including an Orthodox yeshiva in Europe. I get in trouble for making friends with perfect strangers, and for standing on chairs to sing during Shabbos dinner. In addition to being the Senior Rabbi of Simchat Yisrael Messianic Synagogue in West Haven, CT, I write regularly for several publications and speak widely in congregations and conferences. My wife is a Southern-fried Jewish Beltway bandit and a smokin' hot human rights attorney... and please don’t take offense if I dump Tabasco sauce on your cooking.
View all posts by Rabbi Joshua →
This entry was posted in Uncategorized and tagged Pieces of Parasha, Spirituality, torah. Bookmark the permalink.

1 Response to A Tabernacle, Furniture, and the Presence of God