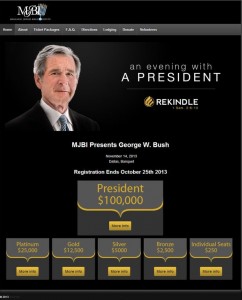 Last week a media firestorm erupted over the decision of the Messianic Jewish Bible Institute (not to be confused with MJTI), to invite former President George W. Bush to speak at their annual fundraiser.

Although I actually agree with much of the criticism over the issue, I am also greatly disappointed that various individuals and publications have used the opportunity to vilify Messianic Jews and accuse us of being malicious, misleading or foolish for our beliefs.

Rabbi David Wolpe, who has been recognized as the leading pulpit rabbi in America, wrote in the Jewish Daily Forward:

The easiest way to write someone off is to simply dismiss them as disingenuous and, well basically, stupid.

Rob Eshman, Publisher and Editor in Chief of the Jewish Journal, in Los Angeles, wrote in his recent editorial:

Personally, I am sick and tired of being bullied and pushed around by our wider Jewish community. So, I have decided to not keep quiet. It is time to rise-up. I feel compelled to respond to the broad-brushing, name-calling, and vitriol directed at Messianic Jews. Therefore, the reason I have not posted anything yet on our blog until now is because I have been busy, let’s just say, “working behind the scenes.”

The world is changing … and attitudes within the Jewish community are changing. The recent Pew survey helped demonstrate this. Therefore, I understand better than anyone the sensitivities within our Jewish community towards Messianic Judaism and faith in Yeshua.

However, for a community which prides itself on tolerance, understanding and dialogue, it is sad that when it comes to Messianic Jews, we’re still willing to settle for emotional vitriol rather than intelligent discourse.

Messianic Judaism is one of the fastest growing faith communities. In a world where non-Orthodox forms of Judaism are struggling to survive, I understand why we are so worrisome to so many. But we are not going away. And if the only remaining definer of Jewishness is ‘not believing in Jesus’ – as it is for far too many of our people today – than we have a bigger problem than whether or not Bush spoke at MJBI’s fundraising dinner.

I'm a Rabbi, writer, thinker, mountain biker, father and husband ... not necessarily in that order. According to my wife, however, I'm just a big nerd. I have degrees in dead languages and ancient stuff. I have studied in various Jewish institutions, including an Orthodox yeshiva in Europe. I get in trouble for making friends with perfect strangers, and for standing on chairs to sing during Shabbos dinner. In addition to being the Senior Rabbi of Simchat Yisrael Messianic Synagogue in West Haven, CT, I write regularly for several publications and speak widely in congregations and conferences. My wife is a Southern-fried Jewish Beltway bandit and a smokin' hot human rights attorney... and please don’t take offense if I dump Tabasco sauce on your cooking.
View all posts by Rabbi Joshua →
This entry was posted in Uncategorized and tagged Bush, Eshman, Messianic Jews, Pew Survey, Wolpe. Bookmark the permalink.

9 Responses to Bush, Wolpe and Criticism of Messianic Jews