A Chasidic Parallel to the Incarnation 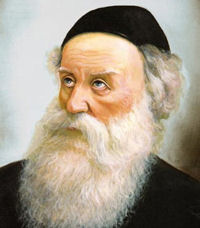 The idea of a pre-existent Messiah is not completely unknown to Judaism. In fact, I lightly touched on this idea in my previous blog post on Breishit, where I connected this idea to Creation, and further to John, chapter 1.

The book of John is traditionally attributed to the apostle John, one of the original twelve shlichim of Yeshua, and believed to be written between 60-100 CE. Many scholars believe that one of the main emphases of the book is to defend Yeshua’s deity. Rather than a history of Yeshua, it is primarily a profound study of who Yeshua is. It is deeply mystical, and filled with rich spirituality and symbolism.

When reading the beginning of John, one should be immediately hit by the imagery of Creation. This is no accident, for there is a direct and purposeful connection between Genesis 1 and John 1. John purposefully uses words and imagery from the Creation Account to equate the G-d of Creation with Yeshua. For John, since Yeshua was at the Beginning (John 1:1), and only G-d was existent at Creation (Genesis 1:1) John is contending they are one and the same! John wants the message to be bold and clear – Yeshua the Messiah is the G-d of Creation.

In the beginning was the Word,

He was with G-d in the beginning.

All things came to be through him,

and without him nothing made had being.

In him was life, and the life was the light of mankind.

The light shines in the darkness,

and the darkness has not suppressed it

…The Word became flesh, and dwelt among us,

and we saw his Sh’khinah,

the Sh’khinah of the father’s only Son,

For those steeped in Jewish thought, the Jewish context of John is clear. John is writing with Genesis in mind. As such, for many of us, the idea of the Torah made flesh – that Yeshua himself is the Torah incarnate – is not a problem.

However, the question may still arise as to the idea of incarnation within a modern Jewish context. One can argue that maybe during the Second Temple period there may have been a few Jews that believed in a divine Messiah, and in some sort of concept of incarnation. But is there a more recent parallel in Jewish texts?

The answer is yes! Around 1797, the Alter Rebbe, Rabbi Schneur Zalman of Liadi (the founder of Chabad Chassidus) composed the Tanya – which quickly became one of the primary texts of the Chassidic movement. In a particular passage of the Tanya, the Alter Rebbe explores an idea of the Torah and HaShem being one and the same. According to the Tanya, the Torah itself is a type of physical incarnation of G-d.

Although this is not an exact parallel to John 1, what it does help us understand is that the idea of incarnation and specifically the idea of “Torah made flesh” are intrinsically Jewish. The Alter Rebbe spends an entire chapter in the Tanya describing this mystical relationship between HaShem and the Torah.

I'm a Rabbi, writer, thinker, mountain biker, father and husband ... not necessarily in that order. According to my wife, however, I'm just a big nerd. I have degrees in dead languages and ancient stuff. I have studied in various Jewish institutions, including an Orthodox yeshiva in Europe. I get in trouble for making friends with perfect strangers, and for standing on chairs to sing during Shabbos dinner. In addition to being the Senior Rabbi of Beth Emunah Messianic Synagogue in Agoura Hills, CA, I write regularly for several publications and speak widely in congregations and conferences. My wife is a Southern-fried Jewish Beltway bandit and a smokin' hot human rights attorney... and please don’t take offense if I dump Tabasco sauce on your cooking.
View all posts by Rabbi Joshua →
This entry was posted in Uncategorized and tagged Apologetics, Deity, mashiach, Messiah, Messianism, mysticism, New Testament, torah, What Your Rabbi Hasn't Told You, Yeshua. Bookmark the permalink.

1 Response to A Chasidic Parallel to the Incarnation