We, however, are Your people, partners to Your covenant, descendants of Your beloved Abraham to whom You made a pledge on Mount Moriah. We are the heirs of Isaac, his son, bound upon the altar. We are Your firstborn people, the congregaiton of Isaac’s son Jacob, whom You named Israel and Jeshurun because Your love for him and Your delight in him. (Siddur Sim Shalom, p. 66)

5 Now if you will pay careful attention to what I say and keep my covenant, then you will be my own treasure from among all the peoples, for all the earth is mine; 6 and you will be a kingdom of priests for me, a nation set apart.

The Chosenness of Israel

Whether we like it or not, it was G-d who chose us. The Torah repeatedly reminds us that we are not supposed to be like everyone else. WHY? Because Israel was chosen for a specific purpose – to sanctify the Name of HaShem and be a Light Unto the Nations. This is, of course, not an easy calling … and one the Jewish people have struggled with for over 3,000 years.

I often consider the words of Tevya the Milkman (from Fiddler on the Roof): “Dear G-d, I realize we’re the Chosen People, but every once in a while, couldn’t You choose someone else?!?”

This question often haunts my mind.

Throughout Inquisitions, pogroms, and even the Holocaust, we have paid dearly for the calling that has been placed upon us.

“Israel is a priestly people and a holy nation. Like the sun that pours forth its light and illuminates all that grows, so also is Israel the blazing fire in the thorn bush … Being a light to the nations is a precious honor for which we have paid dearly, a lofty knowledge written in blood, a covenant sealed in fire.”

G-d has chosen Israel and our covenantal calling and obligation remains – even, and I would say especially as, Jewish followers of Yeshua.

In one of the most decisive (and yet, often overlooked) moments within the early Messianic Jewish community, during one of the most important meetings of the Jerusalem Council, Acts 15:10-11 reports that Peter jumped up and stated:

10 So why are you putting God to the test now by placing a yoke on the neck of the talmidim which neither our fathers nor we have had the strength to bear? 11 No, it is through the love and kindness of the Lord Yeshua that we trust and are delivered-and it’s the same with them.” 12 Then the whole assembly kept still as they listened to Bar-Nabbas and Sha’ul tell what signs and miracles God had done through them among the Gentiles. 13 James broke the silence to reply. “Brothers,” he said, “hear what I have to say. 14 Peter has told in detail what God did when he first began to show his concern for taking from among the Gentiles a people to bear his name. 15 And the words of the Prophets are in complete harmony with this … 19 “Therefore, it is my opinion that we should not put obstacles in the way of the Gentiles who are turning to God.

Out of this chapter we learn three important things:

This follows the teachings of Yeshua, and even becomes the measuring rod by which Paul conducts his own ministry.

With the coming of, and the redemptive work of, Yeshua, a wonderful thing happened (which is described further in Ephesians 2), Gentiles become co-heirs with the Jewish people, and receive the same spiritual rewards through faith in Yeshua (without the same covenantal obligations).

This is a wonderful thing!

Non-Jews, through faith in Yeshua, not only become co-heirs, but share in the blessings promised to the Jewish people. They do this, not be replacing Israel, or assuming the same covenantal roles and responsibilities … but simply through faith … by believing that Yeshua is Israel’s promised Messiah who also extends a hand of relationship to them as well.

However, for Israel, the purpose and calling remains. To continue to be set apart and distinct within this wider body.

The Importance of Messianic Congregations

In order for there to be a believing remnant WITHIN Israel, there must be distinct communities where this Believing Remnant can exist and grow. Not separate from the wider Body of Messiah … but yet, distinct within it.

According to the UMJC’s Defining Messianic Judaism Statement:

For a Messianic Jewish group 1) to fulfill the covenantal responsibility incumbent upon all Jews, 2) to bear witness to Yeshua within the people of Israel, and 3) to serve as an authentic and effective representative of the Jewish people within the body of Messiah, it must place a priority on integration with the wider Jewish world, while sustaining a vital corporate relationship with the Christian Church.

Over the last 1,800 years or so … we have tried the alternative … simply melding into the wider Body of Messiah while trying to maintain our individual identities as Jews. It didn’t work! Not only did we end up defying our covenantal identities and obligations, but we also lost our corporate responsibilities and witness.

Many scholars now maintain that during the 1800’s there were as many as a few hundred thousand to several hundred thousand Jewish believers in Yeshua. With the Holocaust aside, where are there descendants? Where are those in our midst who can claim to be 5th, 6th, or even 7th generation Messianic Jews? Where are those bragging about being the descendants of some of the great Jewish believers of the 1800’s – Rabbi Yechiel Zvi Lichtenstein, Rabbi Isaac Lichtenstein, Paul Phillip Levetoff … etc. All their descendants within just a few generations were fully absorbed and assimilated into the Church.

Within the Body of Messiah there MUST be a Jewish Remnant! But for that remnant to exist it must be nurtured to grow. 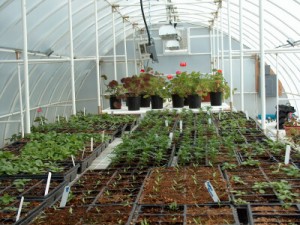 I originally grew up in a small town in the High Desert where it gets pretty hot and dry during the Summer and cold in the Winter (snow is a regular part of the Winter season). People who were serious about plants had to have greenhouses. Greenhouses are structures which trap  warm air and sunlight, allowing plants that could not otherwise grow in a particular climate to thrive.

By protecting and preserving the plants greenhouses enabled people to grow things in an environment where otherwise certain plants would be unable to grow.

The Land of Israel was the perfect environment for the Jewish people to grow and thrive. The physical and spiritual “soil” was perfect for us. But due to our exile … the Diaspora is not a place that can sustain us and nurture us without greenhouses. The forces of assimilation are just too high! That is why Jewish communities have to have elements of insularity and observance in order to ensure Jewish continuity.

Synagogues are greenhouses … they enable us to grow in environments where otherwise we would not be able to grow.

The same thing can also be said of Messianic Synagogues.

There MUST be Messianic Synagogues which allow Jewish followers of Messiah to maintain our covenantal obligations as Jews, AND as faithful followers of Yeshua … integrating these two aspects of our identities together.

Their purpose is not to be exclusive, but for Jewish believers to have any shot at fulfilling our obligations as faithful Jews and as faithful followers of Yeshua, there must be places where this can be nurtured.

I'm a Rabbi, writer, thinker, mountain biker, father and husband ... not necessarily in that order. According to my wife, however, I'm just a big nerd. I have degrees in dead languages and ancient stuff. I have studied in various Jewish institutions, including an Orthodox yeshiva in Europe. I get in trouble for making friends with perfect strangers, and for standing on chairs to sing during Shabbos dinner. In addition to being the Senior Rabbi of Simchat Yisrael Messianic Synagogue in West Haven, CT, I write regularly for several publications and speak widely in congregations and conferences. My wife is a Southern-fried Jewish Beltway bandit and a smokin' hot human rights attorney... and please don’t take offense if I dump Tabasco sauce on your cooking.
View all posts by Rabbi Joshua →
This entry was posted in Uncategorized and tagged Continuity, Jewish Believers, Jewish life, Messianic, Messianic Jews, Messianic Judaism, nexgen, Synagogue. Bookmark the permalink.

1 Response to Synagogues as Greenhouses