Today is Yom HaShoah – Holocaust Remembrance Day. As I’ve mentioned before, my grandfather was a member of the U.S. armed forces that liberated Germany.

Actually, he was both a liberator and a survivor, having escaped Germany as a young boy on the Kindertransport. He was eventually reunited with his parents after staying in a Quaker boarding school in Chiselhurst, England. Together, they immigrated to the United States, where my grandfather joined the Army, which was eager to put his linguistic skills to work.

Serving in U.S. Army intelligence, in 1945, he helped to liberate Dachau. His fellow veterans reported a living nightmare. As the Allies advanced through Axis territory, the Nazis had sent trainloads of Jewish prisoners toward Dachau, which was near Munich, their communications center. When the U.S. military arrived at Dachau as liberators, they confronted thousands of dead bodies. My grandfather never could bring himself to speak of it.

He remained in Germany to assist in U.S.-led war crimes investigations, then returned to the States to attend law school and set up a law practice that assisted Holocaust survivors in retrieving their stolen assets from Swiss and German banks. His refusal to charge survivors with exorbitant fees forced him to run a high-volume practice, which my uncle manages to this day. 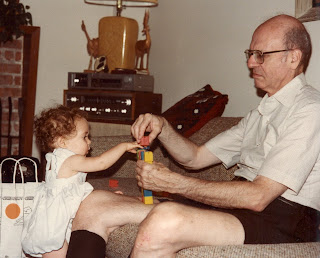 My grandfather died before I was old enough to see beyond the tip of my own nose, or show an interest in anything other than getting him to stack Legos with me. He bequeathed to me his bum right knee, which he exercised using green ankle weights wrapped around his dark knee-high socks. I vividly remember watching his funny exercises, utterly mesmerized by my lanky old Poppy.

I still have trouble reconciling my childhood image of my grandfather with who he really was – a refugee and veteran, a survivor and a liberator, a war crimes investigator, and an advocate for the poor. According to my mother, Dachau ruined his faith in G-d, yet he remained committed to Jewish life, community, and continuity. He was extremely punctual, fastidious, and hard working. His family, his law firm, and the tight-knit community of German Jewish survivors in his neighborhood in Queens, were his main priorities.

I’m now a lawyer, too, having followed in the family tradition of human rights advocacy. I wish he were still here, that I might pick his brain, hear his young lawyer stories, and tell him what a hero he is to me. I wish he could have seen his granddaughter graduate from law school, and that he could have rejoiced with me at my huppah when Joshua and I got married.

In his absence, I cling to bits and scraps …. testimonials of fellow liberators, the jurisprudence of the Nuremburg Tribunals, and my uncle’s occasional stories of his early career as my grandfather’s apprentice.

I found this jewel which includes audio of the first Jewish service broadcast over the radio in Germany, almost immediately after U.S. troops arrived on German soil. Being in the middle of a war zone, the troops didn’t have time for a full service, and chose Ein Keloheinu to mark the event. My grandfather wasn’t a part of this, but perhaps he listened to it on the radio:

The Jewish Service Heard Round the World: Live from Germany

From now on, I’ll think of my grandfather every time I pray Ein Keloheinu.

Chocoholic, jazz head ... prone to rants, and a professional pitbull. I married a terrific guy who happens to be a rabbi, so I guess that makes me a rebbetzin. Who saw that one coming? My grandparents survived the Shoah and spent their lives in the service of others. On my best days, I walk in their footsteps.
View all posts by Monique →
This entry was posted in Uncategorized and tagged holocaust, Jewish History, Prayer. Bookmark the permalink.

8 Responses to Yom HaShoah: A Fresh Look at Ein Keloheinu