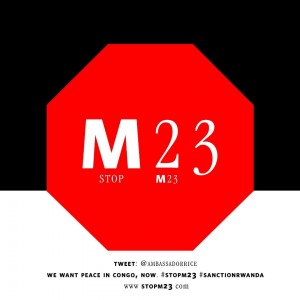 Hey everyone.  Please listen up and take action!

As Jews we have an obligation to Tikkun Olam, and to speak out against injustice and human rights abuses! The information here is a little complex … but is important.

Over the last 16 years in the Democratic Republic of Congo nearly 5.4 million people have been killed in the world’s deadliest war since WWII. And the world has largely remained silent. Then, just last week, a rebel army called M23 invaded Goma, a capital city in this war torn region of Congo. All of the foreign aid workers evacuated at the last minute, and the UN peacekeepers stood by as the rebels advanced. Innocent children are now hiding from rebel recruiters who kidnap kids to be used as child soldiers. Hundreds of thousands have fled the region, wounded are being treated in hospitals, and radio and other media outlets have been silenced.

In the last four months, it has become clear that M23 is being fueled and commanded by the government of Rwanda (as well as some support from the government of Uganda). And Rwanda receives 45% of their budget from the United States and other western countries. That’s roughly 1 billion dollars in direct aid.

That means our tax dollars are funding the M23 rebels. The same rebels who have executed children in the streets, and displaced over 800,000 people.

This information has been known for a long time. But until these last few months there was not definitive proof. Now two separate UN reports have provided overwhelming evidence that the money trail from our taxes to Rwanda, and then from Rwanda to the M23 rebels is real.

A global call has now been launched by human rights organizations calling for sanctions against all Rwandan officials supporting M23. And a freezing of all military aid to Rwanda until the rebels put down their weapons.

The woman who can make this happen is Ambassador Susan Rice, the US Ambassador to the UN. We need to Tweet her, email her, call her. Then do it again and again. The message is simple.

Make this image your FB and Twitter pic. Tell your friends and family. There is only a small window when we we can turn the tide on this war forever. Let’s get those sanctions.

CNN.com – Why the World is Ignoring Congo War

News Interview with Ben Affleck on the situation in Congo:

ABC News – Interview with Ben Affleck on the Congo

I'm a Rabbi, writer, thinker, mountain biker, father and husband ... not necessarily in that order. According to my wife, however, I'm just a big nerd. I have degrees in dead languages and ancient stuff. I have studied in various Jewish institutions, including an Orthodox yeshiva in Europe. I get in trouble for making friends with perfect strangers, and for standing on chairs to sing during Shabbos dinner. In addition to being the Senior Rabbi of Simchat Yisrael Messianic Synagogue in West Haven, CT, I write regularly for several publications and speak widely in congregations and conferences. My wife is a Southern-fried Jewish Beltway bandit and a smokin' hot human rights attorney... and please don’t take offense if I dump Tabasco sauce on your cooking.
View all posts by Rabbi Joshua →
This entry was posted in Uncategorized and tagged Congo, social justice, tikkun olam. Bookmark the permalink.