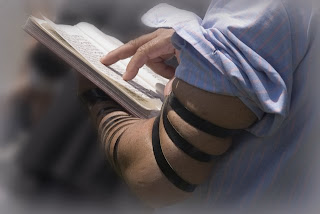 What do you think about ‘prayer’?

Do you envision prayer as participation in a Sacred Drama?

Do you think of the Siddur as an instrument of holiness?

As the High Holidays approach, it is appropriate to think deeper about prayer. For when we pray, we are not just reciting meaningless words, or remembering something that happened in the past. Rather, Jewish prayer is a re-enactment and reliving of sacred events. Through the ritual of prayer we become participants in the Sacred. It is important to think of the Siddur as one would think about a script. Through reenacting these events, we live out the story of the Jewish people, our Covenant with HaShem, and participate with the angels in heavenly worship.

For example, through the Mi Khamokha section of a prayer service (which comes before the Amidah), we relive our redemption from Egypt and celebrate our crossing of the Red Sea.

The Torah Service as well serves as a reenactment of the giving of the Torah on Mt. Sinai. Every time the Torah is removed from the ark, we have the opportunity to recommit ourselves to G-d’s covenant, and respond to HaShem’s Torah. As followers of Yeshua, the Torah is also interestingly a perfect reenactment of the life of Yeshua and the essentials of the Gospel message.

According to John 1, Yeshua is the Torah made flesh. The Torah is the symbol of our covenant with HaShem, deepened and permeated through the Living Torah, our Messiah. When we remove the Torah from the ark, it is an illustration of the incarnation. When we process it through the congregation, we each have an opportunity to reach out and take hold of the message. When the Torah is brought to thebimah and read out loud in front of the community, it is a picture of the Gospel message proclaimed before Israel and the nations. And when we raise up the Torah, it is not just a picture of the ascension, but of Yeshua’s words that, “if I be lifted up I will draw all people unto myself (John 12:32).” And lastly, when we close the doors of the ark after putting the Torah away, we are awaiting the second coming, when Mashiach will be revealed once again.

One of my favorite parts of the service is the Kedusha during the Amidah, when we rise up on our toes while reciting “Kadosh, kadosh, kadosh … Holy is the L-rd of Hosts, the whole earth is filled with Your glory!” The Kedusha is our participation alongside the angels of heaven worshiping around G-d’s throne. In ancient Jewish understanding, it was believed that angels did not have knees. So in keeping with this ancient practice, we still rise up on our toes with knees locked in imitating the angels in heaven.

“The most significant mystical contribution to the Siddur is the Kedusha, said in three different forms, most notably during the readers repetition of the Amida … This is a mystical idea, and like all mysticism it hovers at the edge of intelligibility. Mysticism is an attempt to say the unsayable, know the unknowable, to reach out in language to a reality that lies beyond the scope of language. Often in the course of history, mysticism has tended to devalue the world of senses in favor of a more exalted realm of disembodied spirituality. Jewish mysticism did not take this course. Instead it chose to bathe our life on earth in the dazzling light of the Divine radiance.”

However, Jewish prayer (when understood as sacred drama) is more than just a reenactment of defining events. Prayer actually shapes our theology. It establishes the way we think about Torahand shapes our concepts of redemption and salvation.

In my own personal davening, I often prefer the Conservative Siddur, Sim Shalom, because of its traditional feel, yet intentional deviations of inclusiveness and social consciousness. For example, on pages 8-9, Sim Shalom inserts a passage from the Torah (Parashat Kedoshim) recalling our obligation to be holy:

“You shall all be holy, for I, the L-rd your G-d, am holy. You shall not insult the deaf, or put a stumbling block before the blind. You shall not render an unjust decision; do not be partial to the poor or show deference to the rich; judge your neighbor fairly. Do not stand idly by the blood of your neighbor. You shall not hate your brother in your heart. Love your neighbor as yourself; I am the L-rd” (selected from Lev. 19:2, 14-18).

This recitation reminds us that in Jewish understanding, Holiness is not some mystical state of being that we all hope to attain. Rather, Holiness is a lifestyle. According to Abraham Joshua Heschel:

“The question of religion is what we do with the presence of G-d: how to think, how to feel, how to act; how to live in a way compatible with our being created in the image of G-d.”

The Siddur, in so many ways, reminds us of who we really are and what G-d expects from us. Through the Aleinu we remind ourselves that redemption begins with us, and through our concluding morning prayers we anticipate Yimot Ha’Mashiach – the days of Messiah.

Stay tuned as tomorrow we discuss the baggage we often bring to the Siddur which keeps us from experiencing prayer as sacred drama. We will also explore how to shop for a Siddur, and practical suggestions for delving deeper into Jewish prayer.

“L’Shanah Tovah Tikateivu – May you be inscribed for a sweet New Year!”

I'm a Rabbi, writer, thinker, mountain biker, father and husband ... not necessarily in that order. According to my wife, however, I'm just a big nerd. I have degrees in dead languages and ancient stuff. I have studied in various Jewish institutions, including an Orthodox yeshiva in Europe. I get in trouble for making friends with perfect strangers, and for standing on chairs to sing during Shabbos dinner. In addition to being the Senior Rabbi of Beth Emunah Messianic Synagogue in Agoura Hills, CA, I write regularly for several publications and speak widely in congregations and conferences. My wife is a Southern-fried Jewish Beltway bandit and a smokin' hot human rights attorney... and please don’t take offense if I dump Tabasco sauce on your cooking.
View all posts by Rabbi Joshua →
This entry was posted in Uncategorized and tagged community, practical suggestions, Prayer, Spirituality, Synagogue. Bookmark the permalink.