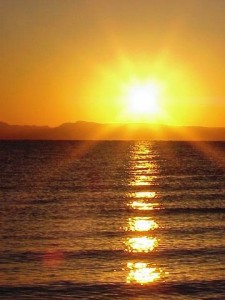 In Luke 23:44-56 we encounter Yeshua’s atoning death, during which, crying out in a loud voice, he declared “Into your hands I commit my Spirit.” Yeshua’s moment of death cataclysmically impacted both the physical and spiritual realms – renting the parokhet (the curtain in the Temple) and causing the earth to shake, darkness to come over the earth, and causing tzadikim (righteous people) to be raised from the dead (see Matthew 27).  This was a cosmic event and an atoning act that would usher in redemption to all who would forever believe.

Many witnesses to Yeshua’s death recognized the moment in which they were in, and many who had not previously believed also came to recognize the revelation of Yeshua’s Messiahship.

We are told that a very righteous member of the Sanhedrin, Joseph of Ramatayim, who had not been in agreement with the decision of a certain number of other members of the Sanhedrin, also recognized the significance of the moment.  He was also a man who, “Looked forward to the Kingdom of G-d (23:51).”  Joseph approached Pilate and asked permission to bury Yeshua’s body, to which permission was granted.

We all know how the story ends.  Three days later Yeshua was miraculously resurrected and revealed himself to his talmidim (his disciples), as well as to many others.  His resurrection was an act with cosmic redemptive ramifications for all humanity.  This week’s reading is an encouragement to recognize the times we are in.  Many of us often live our lives and never recognize the moments in which HaShem is about to act.  However, we are called to be aware and recognize what G-d is doing.

We need to be like the tzadik Joseph of Ramatayim, who not only recognized the cosmic moment of Yeshua’s death, but was one who “looked forward to the Kingdom of G-d.”  We all need to be eagerly seeking out G-d and His Kingdom, and preparing the way for Messianic Redemption.  We as Jews, and especially as Messianic Jews, are placed on the earth for the purpose of Kiddush HaShem – the sanctification of G-d’s Name.  Therefore, let us be ready to recognize what G-d is doing, and prepare ourselves and those around us for the return of Mashiach Tzidkeinu – our Glorious and Righteous Messiah!

I'm a Rabbi, writer, thinker, mountain biker, father and husband ... not necessarily in that order. According to my wife, however, I'm just a big nerd. I have degrees in dead languages and ancient stuff. I have studied in various Jewish institutions, including an Orthodox yeshiva in Europe. I get in trouble for making friends with perfect strangers, and for standing on chairs to sing during Shabbos dinner. In addition to being the Senior Rabbi of Simchat Yisrael Messianic Synagogue in West Haven, CT, I write regularly for several publications and speak widely in congregations and conferences. My wife is a Southern-fried Jewish Beltway bandit and a smokin' hot human rights attorney... and please don’t take offense if I dump Tabasco sauce on your cooking.
View all posts by Rabbi Joshua →
This entry was posted in Uncategorized and tagged Besorah, Chasdei Yeshua, Messiah, New Testament, Yeshua. Bookmark the permalink.