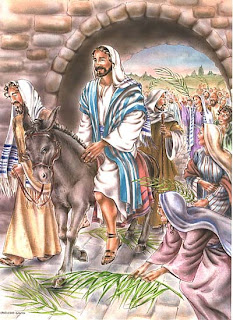 The week before Pesach, after Yeshua had come from the house of Lazarus (whom he had just raised from the dead) in Beit-Anyah, he traveled on to Jerusalem. Hearing that Yeshua was coming, the people began to run out to meet him. As he entered the city, riding on a donkey, the people waved palm branches and shouted “Hosha-Na, Hosha-Na! Baruch HaBa B’Shem HaShem! Melech Yisrael! – Deliver us! Blessed is He who comes in the Name of HaShem, the King of Israel!”

The Passover lambs represented the atonement made on behalf of the Jewish people, and the shedding of whose blood brought deliverance from the plague of death that very first Passover night, as recorded in the book of Exodus. As Yeshua entered the city, and was met with the same recognition, there was a deep understanding of the event taking place. This was a proclamation to Yeshua’s Messiahship and to his being seen as the Deliverer of the Jewish people. Riding on a donkey, a messianic symbol in Biblical times, Yeshua was fulfilling prophesies of what was to happen. He knew that it was now time to reveal himself to the world. In this Besorah reading, John testifies of this. How Yeshua, responding to his disciples Andrew and Philip, proclaimed:

“The time has come for the Son of Man to be glorified. Yes, indeed! I tell you that unless a grain of wheat that falls to the ground dies, it stays just grain; but if it dies, it produces a great harvest (John 12:23-24).”

During that final week of preparation before Passover, Yeshua, like the Passover lamb, was prepared to be sacrificed. And like the Passover lamb, whose blood brought redemption to the people; Yeshua too knew that the through the shedding of his blood, a greater redemption would come to Israel. And when the High Priest slaughtered the lamb, announcing “it is finished,” that Yeshua too, as Israel’s Highest Priest, would also declare “it is finished,” proclaiming the ultimate deliverance from the plague of spiritual death.

As Yeshua’s elect, we must constantly, on a daily basis acknowlege his Messiahship in our lives. We too must cry out, “Hosha-Na! – G-d, please save us!” We must be desperate to see G-d work in our lives, and in our congregations and synagogues to bring about ultimate redemption!

Zol shein zein d’geula, Moshioch zol shoin cumin – How lovely redemption shall be, for Mashiach is on his way!

I'm a Rabbi, writer, thinker, mountain biker, father and husband ... not necessarily in that order. According to my wife, however, I'm just a big nerd. I have degrees in dead languages and ancient stuff. I have studied in various Jewish institutions, including an Orthodox yeshiva in Europe. I get in trouble for making friends with perfect strangers, and for standing on chairs to sing during Shabbos dinner. In addition to being the Senior Rabbi of Simchat Yisrael Messianic Synagogue in West Haven, CT, I write regularly for several publications and speak widely in congregations and conferences. My wife is a Southern-fried Jewish Beltway bandit and a smokin' hot human rights attorney... and please don’t take offense if I dump Tabasco sauce on your cooking.
View all posts by Rabbi Joshua →
This entry was posted in Uncategorized and tagged mashiach, Messiah, New Testament, Passover, Yeshua. Bookmark the permalink.