Rabbis Who Thought for Themselves 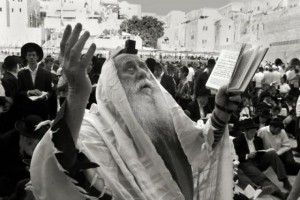 I get tired of the common myth circulated by anti-missionaries that the only Jews who believe in Yeshua are ignorant of Judaism and have been deceived into believing that Yeshua is the Messiah. The argument goes something like this: “If you really understood ‘true Torah Judaism’ you would not have been led astray.” Another related myth is that Yeshua cannot possibly be the Messiah because there are no respected rabbis who ever held such a position.

Both of these accusations are false. Not only are there Messianic Jews thoroughly educated in Jewish life and thought, but over the centuries there have been HUNDREDS of rabbis who have come to the realization that Yeshua is indeed the long-awaited Jewish Messiah. It might be easy to dismiss this reality and chalk it up to something like, “Well, they were just unlearned schmegegies.” But what about respected and learned rabbonim? There certainly could not be any great gedolim who would buy into such nonsense, right?

Among the hundreds of great rabbis who have become believers in Yeshua, many of these were great gedolim and halachic authorities, includeding a number of Chief Rabbis. 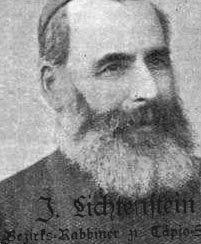 Last week I blogged about Rav Lichtenstein who served for 40 years as the Chief Rabbi of the Northern district of Hungary. He was a respected authority who late in life came to the realization that Yeshua is the Messiah and suffered greatly for his conviction.

He wrote several booklets arguing that faith in Yeshua is compatible with Judaism. Eventually community pressure forced him out of his position as district rabbi, but he never accepted Christian baptism, nor did he ever join a church. Read more HERE. 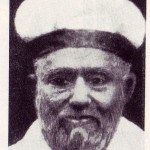 I have also previously blogged about Rabbi Daniel Zion, who was the Chief Rabbi of Bulgaria during the Holocaust, and saved his entire community and brought them to Israel. When he passed away in 1979 at the ripe old age of 96 years old, the Bulgarian Jewish community in Israel gave him a full burial with military and state honors. His casket stood in the center of Jaffa with a military guard, and at noon was carried by men all the way to the Holon cemetery on foot. He was buried as the Chief Rabbi of Bulgarian Jews who saved them from the Nazi Holocaust. Rabbi Daniel Zion also believed that Yeshua was the Messiah and suffered greatly for his conviction. You can read more HERE. Rabbi Israel Zolli (1881-1956) was the former Chief Rabbi of Rome who helped save about 4,000 Roman Jews as the Nazis entered Rome in 1943. Posing as a structural engineer, he entered the Vatican and asked Pope Pius XII to protect Rome’s Jews. The pope acquiesced and agreed to make churches, monasteries, convents, and the Vatican itself sanctuaries for them. Prior to his coming to Rome, Zolli served for 35 years as the Chief Rabbi of Trieste.

Following the war, Rav Zolli made a public confession of faith in 1945 and was forced out of his position. When asked if he therefore believed that the Messiah had come, he said:

“Yes, positively. I have believed it many years. And now I am so firmly convinced of the truth of it that I can face the whole world and defend my faith with the certainty and solidity of the mountains.”

Jewish leaders called him a heretic, excommunicated him, proclaimed a fast for several days in atonement for his “treason,” and mourned him as one dead.

A descendant of an illustrious line of great rabbis, Rav Slostowski received s’micha at the age of 17 and become a great gadol serving congregations in Poland, including teaching in the great rabbinical seminary in Lodz. There he became an authority on matters of kashrut.  Within a few years he received an invitation from the illustrious former Israeli Chief Rabbi, Rav Abraham Isaac Kook, to go to Israel where he was appointed as Secretary to the Chief Rabbinate of Jerusalem.

After Rav Kook’s death in 1935, he moved to Tel Aviv and taught Talmud in an illustrious yeshiva. Like Rav Lichtenstein, Slostowski had a miraculous encounter while reading the New Testament in Hebrew that convinced him that Yeshua really was the Jewish Messiah. Although he tried to keep his new-found conviction quiet, within two months he could do so no longer, and openly confessed his belief that Yeshua was the Messiah and resigned from his position in Tel Aviv. Soon afterward he was pelted with rocks and hospitalized. But he was undeterred in his faith. He continued to publicly proclaim that Yeshua is the Messiah despite constant persecution.

Yechiel Tzvi Lichtenstein (1831-1912) was a late nineteenth century Jewish believer from a Chasidic background. While in Yeshiva, he became a disciple of Yeshua of Nazareth. He served at the Institutum Judaicum Delitzschianum in Germany as a professor of rabbinics and wrote several books and commentaries in Hebrew, including refutations of anti-missionary works. His most popular work was Toldot Yeshua, a response to the famous anti-Yeshua work, Toldot Yeshu. He also worked on revisions to Franz Delitzsch’s Hebrew Gospels, and penned an entire commentary in Hebrew to the New Testament.

*Read a great introduction to Lichtenstein and view his commentary on the NT HERE.

*To view Lichtenstein’s other works visit the Vine of David Repository HERE.

Rabbi Daniel Landsmann (1836-1896) was a Jerusalem tailor and Talmudic scholar who came to faith in Yeshua in 1863. He was almost killed by his own people, angered that someone well educated in Jewish tradition should believe that Yeshua is the Messiah.

His perspective on Yeshua began to change when he found upon the street a page in Hebrew torn from a book. He loved what he read, and when he later discovered that it was from the Sermon on the Mount, he began to think differently about Yeshua. When he began to reveal that he believed Yeshua is the Messiah, his wife left him, a fanatical group attempted to wrestle him to the ground and nail spikes into his hands, and another tried to bury him alive.

He finally moved to New York City and, with a wealth of Talmudic knowledge and a humble spirit, moved many other Jews to consider the Messiahship of Yeshua. Rabbi Nathaniel Friedmann was sent from Russia to win Landsmann (above) back to Judaism in 1889. However his discussions with Landsmann resulted in Friedmann coming to believe in Yeshua’s Messiahship as well. He later was ordained as a Lutheran Pastor and became Landsmann’s successor, and served in NYC until 1941. 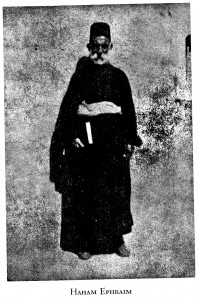 Chacham (a respected title used by Sefardic Jews for great rabbis) Ephraim’s father was a Rabbi in Tiberias, a leading man in the Arabic-speaking Jewish community. Chacham Ephraim himself became esteemed and honored by Jews and Arabs alike and received a leading place in the community, becoming one of the dayanim, overseers of justice, who are specially entrusted with the rights and interests of the individuals of the community. Coincident with these advances he married the daughter of the Chief Rabbi.

Rav Ephraim eventually became friends with Rev. Dr. William Ewing, of the Church of Scotland in Tiberias, who spoke fluent Hebrew. The two men were of almost equal age and soon developed friendly talks about the Talmud and the Bible, but every conversation would eventually lead to claims of Yeshua as the Messiah.

The older Jewish interpretations of the fifty-third chapter of Isaiah were known as referring to the King Messiah, and it was not long before Chacham Ephraim recognized the picture of the Suffering Servant “by whose stripes we are healed.”  The sufferings of his own people throughout the ages and their desperate outlook touched him deeply.

Guided by his friend he con­sidered: “The first temple was destroyed and the nation scattered on account of three great sins committed by Israel, but seventy years later the temple was rebuilt.  Then came the second destruc­tion, and for over 1,800 years Israel has been without the Holy Temple. What was the cause of this second destruction and of the greater scattering?  Idolatry was not the reason.  There was no lack of zeal for either the Torah or for the sacrifices. Why has God forsaken us so long?”

Rav Ephraim wept and prayed and struggled with the problems, unwilling to give in.  He even asked questions about these things of his fellow rabbis, but they could only give the time-worn, formal answers.

Still he struggled, con­vinced that some terrible sin had been the cause of the wrath of HaShem against his people.  Then there dawned upon him the secret of it all— “sinat chinam – hatred without a cause” (Yoma 9b), and a still, small voice expostulated within him, “Cease to hate Me. Love Me and I will give you peace.”

The struggle was over. Chacham Ephraim found a peace that was unbroken until his dying day. What followed was a time of fierce persecution, where he lost everything, including his wife and family. Chacham Ephraim wandered to different cities and eventually settled in Jerusalem where he worked as a manual laborer, and in the evenings would meant with prominent individuals who would come secretly to talk with him. He also led studies in the Bible for other Jewish and Arab believers. He died in August of 1930 and was buried in Jerusalem.

And Many Others as Well

And there are many others – from the early centuries to this very day – great rabbis who believed that Yeshua is indeed the long-awaited Mashiach spoken of by the prophets, and anticipated daily by every religious Jew; including Rabbi Dr. Max Wertheimer, Rabbi Philipp Philips, Rabbi Rudolf Hermann Gurland, Rabbi Asher Levy, Rabbi Dr. Leopold Cohn, Rabbi Berg, Rabbi Charles Freshman, Rabbi George Benedict, Rabbi Jacobs, Rabbi Dr. T. Tirschtiegel, Rabbi Henry Bregman, among many others.

This only further demonstrates that there just may be something special about that mysterious figure from Nazareth.

Update: Part II of this article is now available HERE.

I'm a Rabbi, writer, thinker, mountain biker, father and husband ... not necessarily in that order. According to my wife, however, I'm just a big nerd. I have degrees in dead languages and ancient stuff. I have studied in various Jewish institutions, including an Orthodox yeshiva in Europe. I get in trouble for making friends with perfect strangers, and for standing on chairs to sing during Shabbos dinner. In addition to being the Senior Rabbi of Beth Emunah Messianic Synagogue in Agoura Hills, CA, I write regularly for several publications and speak widely in congregations and conferences. My wife is a Southern-fried Jewish Beltway bandit and a smokin' hot human rights attorney... and please don’t take offense if I dump Tabasco sauce on your cooking.
View all posts by Rabbi Joshua →
This entry was posted in Uncategorized and tagged Chasdei Yeshua, Messianic Jews, pre-war Messianic Judaism, rabbi, What Your Rabbi Hasn't Told You. Bookmark the permalink.

48 Responses to Rabbis Who Thought for Themselves