Laughing in the Darkness 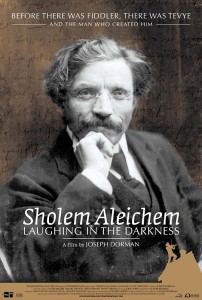 Last night Monique and I, and another couple from our shul, went to go see the film Sholem Aleichem: Laughing in the Darkness, written, produced, and directed by award-winning filmmaker Joseph Dorman. The film is being shown in select theaters throughout the country. If this film comes to your city make sure to see it (you can check here to see where it will be screening).

Dorman’s documentary is a glimpse into the life and work of the great Yiddish writer, Sholem Aleichem, who is most popularly known today as the creator of the stories of Tevya der Milchiker (Tevya the Milkman), which were later the inspiration for the award winning musical and movie, Fiddler on the Roof.

Dorman’s film gives an excellent insight into the great life and work of Aleichem, and a wonderful analyses of the evolution of Jewish life at the time of his writing. After all, Aleichem wrote at one of the most significant intersections in the shaping of Jewish history. During his lifetime the Jewish community was changing at a rapid rate – and forced to confront realities of modernity, organized pogroms, immigration, and secularization. Much of which is reflected in Aleichem’s work.

Maybe the opposite of what you might expect, but there is more Jewish literature written in Yiddish than in any other language, including Hebrew. With the ever increasing demise of the Yiddish language, an entire world of Jewish literature and culture is quickly being lost. With the birth of the modern State of Israel and the modern re-emergence of Hebrew, Yiddish is often perceived negatively. However, Yiddish was spoken for around 1,000 years by European Jews, the primary vehicle by which Jews spoke among ourselves, creating an entire island of culture within the larger world around us.

Aleichem originally wrote in Hebrew but quickly became aware of the realities of doing so, particularly being that Yiddish was truly the vernacular of the masses. If he wanted people to read his work, he needed to write in the language they all read and understood. Additionally, he also latched onto the evolved richness and humor that existed within Yiddish. Aleichem wrote with a style and perspective that was in many ways truly original.

Like many great writers and thinkers, it was not until his death in 1916 at the young age of 57 that he was truly appreciated for his great contribution to Jewish life and literature. His funeral was attended by a couple hundred thousand people, one of the largest funerals ever held within New York City.

I'm a Rabbi, writer, thinker, mountain biker, father and husband ... not necessarily in that order. According to my wife, however, I'm just a big nerd. I have degrees in dead languages and ancient stuff. I have studied in various Jewish institutions, including an Orthodox yeshiva in Europe. I get in trouble for making friends with perfect strangers, and for standing on chairs to sing during Shabbos dinner. In addition to being the Senior Rabbi of Simchat Yisrael Messianic Synagogue in West Haven, CT, I write regularly for several publications and speak widely in congregations and conferences. My wife is a Southern-fried Jewish Beltway bandit and a smokin' hot human rights attorney... and please don’t take offense if I dump Tabasco sauce on your cooking.
View all posts by Rabbi Joshua →
This entry was posted in Uncategorized and tagged History, Jewish History, Jewish life, Movies. Bookmark the permalink.

3 Responses to Laughing in the Darkness