Tongue of the Prophets

At the behest of my friend and colleague, Rabbi Dr. Stuart Dauermann, I finally read Tongue of the Prophets by Robert St. John.

Let me tell you … I could not put it down, and even got Monique reading it. So if you are looking for some great Summer reading … here you go.

Tongue of the Prophets is the riveting biography of Eliezer Ben-Yehudah, the father of Modern Hebrew, who single handedly resurrected Hebrew into a living, spoken modern language. And he did this in spite of constant opposition and ridicule during his lifetime. As with so many great individuals in history, he was only truly appreciated after his death.

He immigrated to Jerusalem in 1881, and following his lead, many young idealists also began moving to Israel to establish kibbutzim and moshavim. He personally was a driving force for these early waves of settlement. In addition to his being the Father of Modern Hebrew, he may well have been the true Father of Zionism. 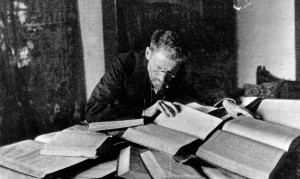 The book sat on my bookshelf for many years, and I have always intended to read it, but just never got around to it. Thanks to Rabbi Dauermann, I am so glad I read it. The book is anything but boring and gives a fascinating look at not only the personal life and struggles of Ben-Yehudah, but what life was like in Jerusalem under the Ottoman Empire and the British Mandate, the early Zionist Movement in Europe, and the settlement of Israel in the late 1800’s and early 1900’s.

In the epilogue to the book, the author writes of Ben-Yehudah:

“In life he had been fought, denounced, vilified by Sephardic Jews and Ashkenazic Jews, by Zionists and non-Zionists, by haters of Hebrew and lovers of Hebrew, the Orthodox and the un-Orthodox, Jews in Palestine and Jews out in the Diaspora.

In death thirty thousand Jews followed his body to the grave. School children with black-draped flags. Ultra-religious Jews with long side curls  and garments reminiscent of the ghettos of Europe. Jewish businessmen, very Western-looking, from Tel Aviv and Haifa. Healthy young pioneers who had been streaming in for two days from remote colonies. Jewish soldiers, Jewish scholars, Jewish statesmen. There were Christians and Arabs in the procession, and British High officials. Dominican monks and Franciscan monks and Moslem leaders.

Palestine was ordered to observe three days of national mourning. Palestine wept, knowing a man had died who had all the qualifications of greatness (p. 364).”

This book is fascinating and reads like a novel, full of suspense, love, heartache, joy, and suffering. For those who love history or desire to be inspired by a great figure, I highly recommend this book. You will not be sorry.

The book is available online through Amazon and other book sellers.

I'm a Rabbi, writer, thinker, mountain biker, father and husband ... not necessarily in that order. According to my wife, however, I'm just a big nerd. I have degrees in dead languages and ancient stuff. I have studied in various Jewish institutions, including an Orthodox yeshiva in Europe. I get in trouble for making friends with perfect strangers, and for standing on chairs to sing during Shabbos dinner. In addition to being the Senior Rabbi of Simchat Yisrael Messianic Synagogue in West Haven, CT, I write regularly for several publications and speak widely in congregations and conferences. My wife is a Southern-fried Jewish Beltway bandit and a smokin' hot human rights attorney... and please don’t take offense if I dump Tabasco sauce on your cooking.
View all posts by Rabbi Joshua →
This entry was posted in Uncategorized and tagged Book Reviews, Hebrew, History, israel, Jewish History. Bookmark the permalink.

9 Responses to Tongue of the Prophets