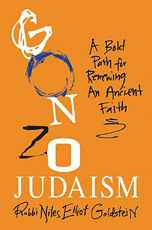 Well … as promised, here is the third and final segment of my review on the book Gonzo Judaism, by Rabbi Niles Elliot Goldstein.  To catch up you can read Part I HERE and Part II HERE.

I have never done a multiple-post book review before. What I originally thought would be a quick review has turned out to be three posts long. This book is filled with more good stuff than I probably originally gave it credit for.  My first review was a reflection on my initial thoughts on the book and a survey of the first chapter. The second post continued with a review of the next three chapters,  and particularly four key points the author believes are the secret of Chabad’s success. This third post will review the last three chapters of Gonzo Judaism, and will particularly discuss Goldstein’s comments about Messianic Jews.

Chapter V – Give Tents a Chance: A Second Look at Tribalism

“What does Judaism have to say about tribalism? A lot. The early Israelites were made up of nomadic tribes, and their faith was rooted in tribal values – where community and compassion were paramount, where interdependence was the rule and survival mechanism, where people did things not because they wanted to but because they were supposed to. Our Israelite ancestors made decisions not based on their needs alone, but by taking into consideration the needs of others as well (p. 94).”

Goldstein then expands on why getting back to our tribal values is so important:

“When we strip away the exoskeleton of mainstream religion and dive into its primordial guts, we take ourselves back to a much more basic form of connection with the spiritual, one that occurs on a more overt physical level. Not dogma or doctrine, but fire and blood – these are the tools of the tribe (p. 96).”

He then goes on to discuss how the observance of Brit Milah, Counting the Omer, Lag B’Omer, and having an “open tent” ethic can revitalize Jewish life. He concludes the chapter by noting how important it is to be empowering as leaders, and to think out of the box, because, “Historically, some of the most creative and influential ideas for revitalizing Jewish life have often flowed from the bottom up (p. 108).”

Although we are encouraged throughout the book to be open and pursue a deeper spirituality, Goldstein also cautions that we must be careful not to stray after “flash” (my word, not his). It is too easy, he warns, to get caught up in false or pseudo-spirituality that is just “too warm and fuzzy.” Included in his critique of “false prophets” is the famous Kabbalah Center (known for its several affiliated celebrities and pop-mysticism). He then goes on to include other “messianic and mystical groups” to be cautious of – which include “Jews for Jesus, Messianic Judaism, the Kabbalah Center, and Chabad-Lubavitch (p. 117).”

Honestly, I thought this was quite funny. As a Messianic Jew, I am quite used to being falsely labeled as a “cult” or “false prophet.” But to be included alongside Chabad was quite interesting.

Later in the chapter, Goldstein expands on the danger of Jews who believe in Yeshua:

“Jews for Jesus, as well as Messianic congregations, have adopted the Pentecostal model – but with a twist. These groups want to save your soul very badly, and they claim to offer you the best of both worlds, a win-win scenario that you’d be a fool to pass up. In their belief system, you can remain a Jew and retain whatever Jewish practices you follow. All you have to do is accept Jesus as the Messiah. Then, and only then, will you find the fullest expression of your Jewish identity (p. 127).”

He then goes on to ask, “Tempted? I’d sure be, if I didn’t know to what extent their theological vision was a mangled distortion of Judaism (p. 127).”

I have to admit that there are many out there who fall under the label “Messianic” who do actually have a similarly shallow theological understanding. However, with that said, I also think Goldstein greatly distorts, over-simplifies and largely speaks out of ignorance in regard to a more mature form of Messianic Judaism. In speaking of the particular vision of Messianic Judaism in which I share with my friends and colleagues within Hashivenu and the MJRC, I have these particular critiques:

1) Although it is common to lump us together, Jews for Jesus and Messianic Judaism are on complete different ends of a spectrum and cannot be so naively lumped together.

Jews for Jesus is a specific missionary organization that actively works to convert Jews to Christianity. The difference is that Messianic Jews fundamentally believe that Jews are obligated to remain Jews, and live Jewish lives in obedience to our covenant relationship with God; through the redemption of Yeshua the Messiah.  Another difference is that Messianic Jews are not seeking to convert Jews away from Judaism.  As a Judaism, like other forms of Judaism, we desire to see Jews who have left their Jewishness return to Judaism and live covenant faithful lives within the Jewish community. From a Messianic Jewish perspective, faith in a Jewish Messiah should lead one to a greater sense of Jewish identity, not away from it.

2) Regarding the rest of his comment about us wanting “to save your soul very badly” and that somehow we are falsely luring people into a sort of trap knowingly is, in my opinion, over simplified and distorted. As I stated above, we do believe that faith in the Jewish Messiah should lead to a greater sense of Jewish identity, but not because of some simplistic reason attributed to Evangelical Christianity, but because of the covenant faithfulness G-d expects of us as Jews, of which belief in Messiah is an integral and interwoven part.

The final chapter begins with a challenge to re-imagine High Holidays, and specifically how to bring the awe and holy back into them. Goldstein notes, “There are a large number of disaffected Jews out there who are afraid, perhaps unconsciously, to confront their disaffection with Judaism … But disaffection is still a sign of engagement, still a signal that a person is struggling, sometimes feverishly, with a relationship that matters to them (p. 140).”

Therefore it is our task to infuse holiness back into Judaism in a way that provides meaning into peoples lives.

Goldstein concludes his book with a summary of his overall thesis:

“If Judaism is to be relevant and meaningful to this generation of Jews, it must recapture the prophetic spirit, the gonzo impulse that has animated our people for so many centuries and has led us to so much creativity and achievement (p. 159).”

At the end of the book he also includes two helpful appendices of recommended Jewish organizations and institutions which he believes share this gonzo approach to Judaism, and the second appendix is a list of recommended reading resources.

Although I did have some critiques, I would still highly recommend Rabbi Goldstein’s book, Gonzo Judaism as a must-read for those who resonate with his message for a renewed approach to Jewish life and for those looking for specific ideas and how-to’s. As this review was already three posts long I obviously could not share everything.

So if you have enjoyed these posts I encourage you to buy the book.

I'm a Rabbi, writer, thinker, mountain biker, father and husband ... not necessarily in that order. According to my wife, however, I'm just a big nerd. I have degrees in dead languages and ancient stuff. I have studied in various Jewish institutions, including an Orthodox yeshiva in Europe. I get in trouble for making friends with perfect strangers, and for standing on chairs to sing during Shabbos dinner. In addition to being the Senior Rabbi of Simchat Yisrael Messianic Synagogue in West Haven, CT, I write regularly for several publications and speak widely in congregations and conferences. My wife is a Southern-fried Jewish Beltway bandit and a smokin' hot human rights attorney... and please don’t take offense if I dump Tabasco sauce on your cooking.
View all posts by Rabbi Joshua →
This entry was posted in Uncategorized and tagged Book Reviews, helpful suggestions, nexgen, practical suggestions, Spirituality. Bookmark the permalink.