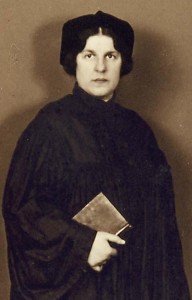 In 1972, when Sally Priesand was ordained at the Reform Movement’s Hebrew Union College in Cincinnati, she was mistakenly referred to as the “first female rabbi ever.” She was indeed the first woman ordained in America, but not “ever” — this misinformation was never corrected by those who knew better. Only when the Berlin Wall came down and the archives in East Germany became accessible was the legacy of Rabbi Regina Jonas rediscovered.

There were indeed female rabbinic forerunners to Rabbi Jonas, including the “Chassidic Rebbe” Chanah Rachel Verbermacher in the 19th century, known as the Maiden of Ludmir, and in 17th Century Kurdistan, Osnat Barazani, a rosh yeshiva and Torah scholar who was referred to in a letter as “rabbanit.” However, Regina Jonas was the first woman to be formally ordained and recognized as a rabbi in 1935, and was killed in Auschwitz in October 1944. She would probably have been completely forgotten had she not left traces both in Theresienstadt and in her native city of Berlin. For unknown reasons, none of her male colleagues, among them Rabbi Leo Baeck (1873–1956) and the psychoanalyst Viktor Frankl (1905–1997), ever mentioned her after the Shoah.

From an early age, Rabbi Jonas felt drawn to the rabbinate. When once asked why she, as a woman, would ever consider the rabbinate as a profession, she wrote:

“If I confess what motivated me, a woman, to become a rabbi, two things come to mind. My belief in God’s calling and my love of humans. God planted in our heart skills and a vocation without asking about gender. Therefore, it is the duty of men and women alike to work and create according to the skills given by God.” C.-V.-Zeitung, June 23, 1938.

Regina Jonas was devoted to Jewish education.  Not content with simply being a teacher, she went on to study at the prestigious Hochschule für die Wissenschaft des Judentums (College for the Science of Judaism) in Berlin. She devoted her thesis to exploring the Talmudic sources regarding women’s ordination. A copy of her thesis has been preserved and can be found at the Centrum Judaicumin Berlin. Submitted in June 1930, this paper is the first known attempt to find a halachic basis for the ordination of women.

Jonas combined a halachic line of argument with a modern attitude. However, she did not follow the Reform movement, which was willing to achieve modernization by abandoning halacha altogether. Rather, Rabbi Jonas wanted to explore smicha for women from the Jewish legal sources. For her, the female rabbinate should be understood as a continuity of tradition. This proves Jonas’s independence both from Orthodoxy, which held equality as incompatible with halacha, and from Reform, which abandoned halachic reasoning in pursuit of female emancipatory interests.

She was supposed to have been granted smicha with the full support of the majority of her teachers.  However, one Talmudic professor who declined to sign her rabbinic diploma kept her from fulfilling her ambition.  At the request of the Union of Liberal Rabbis in Germany, in 1935, Regina Jonas became the first woman to be ordained in a private ceremony conducted by a progressive thinking rabbi.  Rabbi Jonas served as a rabbi, preacher, and teacher in the Berlin Jewish community. She later worked in the Terezin ghetto, and then later in Theresienstadt. Even in a concentration camp she worked as rabbi, preaching and counseling. She was officially part of the Referat für psychische Hygiene, which was led by the famous psychoanalyst Viktor Frankl.  In 1941 she was sent to Auschwitz where she was killed. The memory of Rabbi Regina Jonas quickly faded from memory.

Because I know someone will ask or misunderstand my reason for blogging about her, let me make clear that Rabbi Jonas was NOT a Messianic Jew, nor to my knowledge did she ever believe in Yeshua. Yet, she opened the door to future generations of women rabbis, including the possibility of women rabbis within Messianic Judaism.

I'm a Rabbi, writer, thinker, mountain biker, father and husband ... not necessarily in that order. According to my wife, however, I'm just a big nerd. I have degrees in dead languages and ancient stuff. I have studied in various Jewish institutions, including an Orthodox yeshiva in Europe. I get in trouble for making friends with perfect strangers, and for standing on chairs to sing during Shabbos dinner. In addition to being the Senior Rabbi of Simchat Yisrael Messianic Synagogue in West Haven, CT, I write regularly for several publications and speak widely in congregations and conferences. My wife is a Southern-fried Jewish Beltway bandit and a smokin' hot human rights attorney... and please don’t take offense if I dump Tabasco sauce on your cooking.
View all posts by Rabbi Joshua →
This entry was posted in Uncategorized and tagged holocaust, rabbi, rabbinics, women, Women rabbis. Bookmark the permalink.

16 Responses to A Forgotten Voice