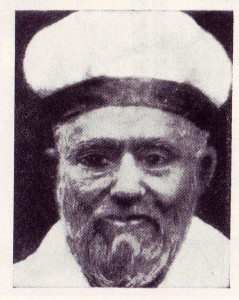 When HaRav Daniel Zion (b. 1883) passed away in 1979 at the ripe old age of 96 years old, the Bulgarian Jewish community in Israel gave him a full burial with military and state honors. His casket stood in the center of Jaffa with a military guard, and at noon was carried by men all the way to the Holon cemetery on foot. He was buried as the Chief Rabbi of Bulgarian Jews who saved them from the Nazi Holocaust. Rabbi Daniel Zion also believed that Yeshua was the Messiah.

Rabbi Daniel Zion is most honored and remembered for his tremendous efforts during World War II to save the Bulgarian Jewish Community.

According to Rabbi Zion himself, a major change happened in his life one morning while he was praying.  He was looking at the sunrise when Yeshua appeared to him in a vision. Rav Zion came to believe in Yeshua, yet remained faithful to Jewish life, observance of the Torah, and to the Jewish people.

Each Shabbat afternoon, Rabbi Zion began studying the New Testament with a very select, small group of Bulgarian Jews in his home. Among these few were some of the leading members of the Jewish community in Sofia.

Rabbi Zion’s faith in Yeshua as the Messiah became a well know secret in the local Jewish community.However his position was so honored, and his personal services so highly esteemed, that no one openly criticized him. And because he remained well within the framework of Orthodox Judaism and did not stop living as an observant Jew, there was little any of his opponents could point to as heresy.

When Nazi Germany occupied Bulgaria, Rabbi Zion, as the Chief Rabbi and spiritual leader of Bulgaria’s Jewish community became the object of persecution and ridicule. On one particular occasion he was taken and publicly flogged in front of the Great Synagogue of Sofia.

Rabbi Zion had built a strong friendship with Metropolitan Stephen, the head of the Church in Bulgaria. As a result of their relationship, Metropolitan Stephen remained a strong advocate of the Jewish community. When intense discussions arose about shipping Bulgaria’s Jews to Germany, Rabbi Zion and his secretary, A. A. Anski, wrote a letter to the King of Bulgaria. In the letter, Rabbi Zion begged the King not to allow Bulgaria’s Jewish community to be taken out of Bulgaria. Rav Zion wrote in this letter that he had seen Yeshua in a vision, and Yeshua told him to warn the King from delivering the Jewish people to the Nazis.

The next day, the King went to Germany for a meeting with the Nazi Government and Hitler himself. King Boris of Bulgaria stood his ground and did not submit to Nazi pressure to deliver Bulgarian Jews to the death camps of Poland and Germany.

Rabbi Daniel Zion was able to continue to save many Bulgarian Jews throughout the War. And although the government of Bulgaria fell to the Russians in September 1944, Rav Zion remained the leader and Chief Rabbi of Bulgaria until 1949, when he and most of the Bulgarian Jewish community immigrated toIsrael.

In Israel, Rabbi Zion continued to serve the Bulgarian Jews and became the Chief Rabbi of Jaffa. In 1954, Israel’s Chief Rabbi, Samuel Toledano, invited Rabbi Daniel to be a dayan, a judge on the Rabbinical Court of Jerusalem. However, when rumors started to fly that Rabbi Zion believed in Yeshua, Rabbi Toledano confronted him in his office and asked him personally about the rumors.

Rabbi Zion explained to Toledano his position. He explained that he accepted Yeshua as the Messiah but did not accept Christianity as the true expression of the teaching and person of Yeshua. Rabbi Toledano decided that he could live with this position as long as Rabbi Zion kept it to himself. However, Rabbi Zion refused, feeling that he could not keep it a secret, and Toledano was forced to bring Rabbi Zion before the rabbinical court for the other rabbis to decide what should be done.

Evidence of Rabbi Daniel Zion’s faith in Yeshua was brought before the religious court in the form of four books he had written in Bulgarian. Although the Rabbinical Court stripped Rabbi Daniel of his rabbinic title, the Bulgarian Jewish community continued to honor Rabbi Zion as their Rabbi.

Rabbi Zion was even invited by Kol Israel, the official radio station of the State of Israel, to share his story and his faith in Yeshua:

“More than twenty years ago I had the first opportunity of reading the New Testament. It influenced me greatly. I began to speak about it in a small circle in Bulgaria. I always regretted that Yeshua the Messiah has been estranged from the community of Israel … I must confess that my position as a Rabbi did not allow me at once to come out openly before the world in order to declare this truth, until G-d, in His mercy, set me free from all fear … do not think that I have left my Judaism. On the contrary, I have remained Jewish, and have become more Jewish because Yeshua himself remained Jewish.”

Rabbi Zion continued to serve as a rabbi in Jaffa where he officiated in the synagogue until the 6th of October 1973. He did not often speak of Yeshua openly from the pulpit, yet he would often bring in stories and parables from the New Testament.

Each Shabbat afternoon, Rabbi Zion would bring home a group of his fellow worshippers from the synagogue, and they would study about Yeshua from the New Testament until they had to return to the Synagogue for the evening prayers.

Many times Rav Zion was offered large amounts of money for the use of his name and his story. However, in each case he rejected the offers. He did not want to destroy his reputation within the people of Israel for the sake of money.  If anyone gave him free-will donations with no strings attached, he would accept it and pass it on to charitable organizations for the blind, or to orphans and widows. He himself lived in abject poverty as a result of his faith.

*To learn more about Rabbi Daniel Zion, read Joseph Shulam’s article. You can also read more about him on HERE.

I'm a Rabbi, writer, thinker, mountain biker, father and husband ... not necessarily in that order. According to my wife, however, I'm just a big nerd. I have degrees in dead languages and ancient stuff. I have studied in various Jewish institutions, including an Orthodox yeshiva in Europe. I get in trouble for making friends with perfect strangers, and for standing on chairs to sing during Shabbos dinner. In addition to being the Senior Rabbi of Simchat Yisrael Messianic Synagogue in West Haven, CT, I write regularly for several publications and speak widely in congregations and conferences. My wife is a Southern-fried Jewish Beltway bandit and a smokin' hot human rights attorney... and please don’t take offense if I dump Tabasco sauce on your cooking.
View all posts by Rabbi Joshua →
This entry was posted in Uncategorized and tagged Apologetics, Chasdei Yeshua, holocaust, Jewish Believers, mashiach, Messiah, Messianism, pre-war Messianic Judaism, Spirituality, What Your Rabbi Hasn't Told You. Bookmark the permalink.