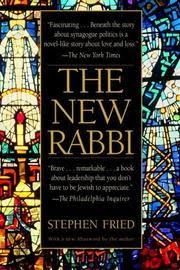 The New Rabbi by Stephen Fried is an absolute MUST READ! I recently finished the book and have been recommending it to a number of other rabbis and leaders. I originally came across the book a few years ago. However, a recent leadership decision prompted me to pick-up the book and read it.
Written by an award-winning investigative journalist, the book chronicles the politics of community, the power of inspirational leaders, the retail business of religion, the yearning for spirituality, and the wonderfully complicated world of American Jews.
Although a work of non-fiction, the book reads like a novel – full of excitement, intrigue, and emotion. Stephen Fried is able to write a book that pulls you into the story and gives you a glimpse into the search process of finding a new rabbi.
The center of this compelling chronicle is Har Zion Temple in Philadelphia, which for the last eighty years has been one of the largest and most influential congregations in America. For thirty years Rabbi Gerald Wolpe was its spiritual leader – a brilliant sermonizer of wide renown. But with the announcement of his retirement, a remarkable nationwide search process is begun. The story of how such a congregation searches for a new leader is largely unknown to the lay world. During this dramatic moment, Wolpe agreed to give extraordinary access to Fried, inviting him – and the reader – into the intense personal and professional life of the clergy and the complex behind-the-scenes life of a major Conservative congregation. The result is a front-row seat at the usually clandestine process of choosing a new rabbi – as what was expected to be a simple search for a successor nearly tears a venerable congregation apart.
If you are part of a search committee looking for a new congregational leader, if you are currently a congregational leader looking to retire, or if you are a newly hired young leader – this book is for you. And even if you are none-of-the-above, but are intrigued at the inner workings of the clergy and the politics of congregational life, you too will enjoy this quick, easy to read, and well-written book.
And make sure to read the paperback which has a new afterward which gives an update on the congregation, the rabbi, and many of the other individuals in the book.
I cannot recommend this book enough. Pick it up and let me know what you think!

I'm a Rabbi, writer, thinker, mountain biker, father and husband ... not necessarily in that order. According to my wife, however, I'm just a big nerd. I have degrees in dead languages and ancient stuff. I have studied in various Jewish institutions, including an Orthodox yeshiva in Europe. I get in trouble for making friends with perfect strangers, and for standing on chairs to sing during Shabbos dinner. In addition to being the Senior Rabbi of Simchat Yisrael Messianic Synagogue in West Haven, CT, I write regularly for several publications and speak widely in congregations and conferences. My wife is a Southern-fried Jewish Beltway bandit and a smokin' hot human rights attorney... and please don’t take offense if I dump Tabasco sauce on your cooking.
View all posts by Rabbi Joshua →
This entry was posted in Uncategorized and tagged Book Reviews, rabbi, rabbinics. Bookmark the permalink.

4 Responses to The New Rabbi