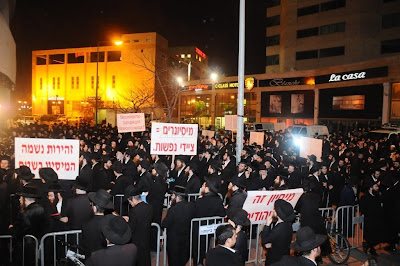 Persecution against Messianic Jews has increased lately in Israel, and last Monday night, February 21st, nearly 1,000 protesters gathered outside a Messianic congregation in Ashdod to spew vicious hatred and lies. The event was organized by Yad L’Achim and was attended by many well-known rabbis who participated in delivering virulent speeches – spewing the typical epithets that Messianic Jews steal Jewish souls, prey on children, and equating us with Hitler. The following quote is taken from an eye witness to the events as they unfolded:

“Before I realized what was happening I had between 50-100 people surrounding me, calling me a missionary and asking me what I was doing in Israel. Boys as young as 6-7 years old were hissing at me, making hateful faces. The group closed in more and more trying to intimidate and I’ll be honest it worked.

There was a heavy police presence in the area, but it took the police a while to notice (or want to notice) that suddenly I had become a topic of interest to many in the crowd …

The spirit of hate, the demonic spirit that just radiated off of them is hard to put into words. I tried to look some in the eyes, but I found only a cold, death-like gaze staring back at me.

After about 15 minutes of the crowd getting closer and closer and becoming more and more vocal, I knew it was time to go. I asked a police officer to escort me to my car and then left.

I felt so sick to my stomach. I wasn’t really afraid. I was honestly just so sad. These are my fellow Jews, my fellow Israelis, my family … and they wanted to kill me. I’m convinced that if the police had not been there, they would have tried.”

We must pray, speak-up, and stand together with our holy brothers and sisters in Eretz Yisrael who are at the forefront and paving the way for the rest of us.

Update: Tomorrow, Tuesday, March 1st, hundreds of Ultra-Orthodox protesters are expected to stage a similar protest in Arad. Messianic Jews in that city have faced violent persecution for years. Please pray for the safety of our fellow Messianic Jews in Arad … and we’ll keep you posted.

I'm a Rabbi, writer, thinker, mountain biker, father and husband ... not necessarily in that order. According to my wife, however, I'm just a big nerd. I have degrees in dead languages and ancient stuff. I have studied in various Jewish institutions, including an Orthodox yeshiva in Europe. I get in trouble for making friends with perfect strangers, and for standing on chairs to sing during Shabbos dinner. In addition to being the Senior Rabbi of Beth Emunah Messianic Synagogue in Agoura Hills, CA, I write regularly for several publications and speak widely in congregations and conferences. My wife is a Southern-fried Jewish Beltway bandit and a smokin' hot human rights attorney... and please don’t take offense if I dump Tabasco sauce on your cooking.
View all posts by Rabbi Joshua →
This entry was posted in Uncategorized and tagged Chasdei Yeshua, community, israel, Jewish Believers, Messianic Jews. Bookmark the permalink.

4 Responses to Hate-Fest in Ashdod