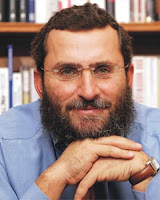 “Welcome to a generation where rabbis have been defanged and declawed. The days of the rabbi as a weighty moral conscience are behind us now. The rabbi as irritant has been replaced with rabbi as ego-massager … The rabbi is there for ceremony. We train him for five years to announce page numbers in synagogue and present your daughter with a leather-bound Bible for her bat mitzvah … Through our desire not to offend we rabbis have reduced ourselves to a caricature, the full vitality of our souls sandwiched into the extremely narrow bandwidth accorded to us by a community that calls on us primarily for lifecycle events.

I constantly hear myself being described as “controversial,” as if that’s an insult to a rabbi. Yes, I am a rabbi who is loved and hated. A preparedness to be unpopular is what I have learned from Judaism, not to mention the world’s most influential figures … The most influential rabbis in the world today are those like Rabbi Marvin Hier of the Simon Wiesenthal Center in Los Angeles, who aren’t afraid to take verbal jackhammers to anti-Semites, notwithstanding the discomfort it breeds among some less-vocal Jews … Rabbis must begin broadening their roles away from the ceremonial and toward the provocative. You’re given a pulpit. Use it.”

-Rabbi Shmuley Boteach from his recent article “The End of the Rabbi as Mr. Nice Guy.”

I'm a Rabbi, writer, thinker, mountain biker, father and husband ... not necessarily in that order. According to my wife, however, I'm just a big nerd. I have degrees in dead languages and ancient stuff. I have studied in various Jewish institutions, including an Orthodox yeshiva in Europe. I get in trouble for making friends with perfect strangers, and for standing on chairs to sing during Shabbos dinner. In addition to being the Senior Rabbi of Simchat Yisrael Messianic Synagogue in West Haven, CT, I write regularly for several publications and speak widely in congregations and conferences. My wife is a Southern-fried Jewish Beltway bandit and a smokin' hot human rights attorney... and please don’t take offense if I dump Tabasco sauce on your cooking.
View all posts by Rabbi Joshua →
This entry was posted in Uncategorized and tagged Quote of the Day. Bookmark the permalink.