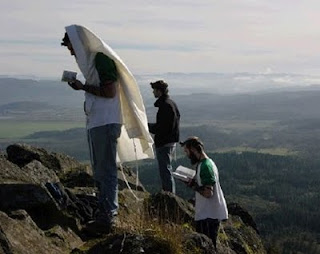 In Matthew 6:1-18, Yeshua emphasizes the importance of kavana, of proper intention, in observance of Torah commands. According to Yeshua, the intention of observing the mitzvot should not be so that others see you doing them, but rather out of obedience to HaShem.

When giving tzedaka, Yeshua states that one is to do so without drawing attention to one’s self, or to the amount. For when done so “your tzedaka will be a secret; and your Father, who sees what you do in secret, will reward you (vs. 4).

In the same way, Yeshua also states that when praying, you are not to pray in a way that draws attention to yourself. But rather, you are to go secretly into your “prayer closet.” For our communication is the primary link in our relationship with the Divine. For when we pray in secret, and do not attempt to win the admiration of others, our Father, who sees what is done in secret, will reward us (vs. 6).

Yeshua also gives us some unique insight into prayer itself. That we should not worry about being eloquent, or wordy. But to pray simply, “for your Father knows what you need before you even ask him (vs. 8).” This idea that G-d is more pleased with the humble prayers of the righteous is paralleled in the Talmud:

“When you address the Holy One, blessed be He, let your words be few (b. Berachot 61a).”

The pattern Yeshua follows with (commonly known as “the Lord’s Prayer”) is actually the basic outline of several prayer formulas common within Jewish tradition. The beginning of the prayer, “Our Father in Heaven – Avinu She’BaShamayim,” is the opening of several liturgical prayers in Judaism. And the following line, “may your Name be kept holy” is echoed in the Kaddish – “yitgadal v’yitkadash, shmey raba – magnified and sanctified be your great name.”

What Yeshua does is give us a pattern for prayer. It is not a magic formula, or the only way to pray, but the basic format for acknowledging and communicating with G-d. What is additionally interesting is that this prayer of Yeshua incorporates and acknowledges patterns of prayer already existing within the Jewish world. Yeshua appropriates and further invigorates the words of tradition and gives them a fuller meaning and understanding.

Yeshua’s common practice is to give Jewish tradition a deeper and fuller meaning. To correct misunderstandings and interpretations that miss the central tenet of justice, mercy and faith (Mt. 23:23). In our observance of the mitzvot, may we take heed the words of Yeshua, and live out Torah with the holiest of intentions, and do the mitzvot to honor G-d, rather than the approval or admiration of others.

I'm a Rabbi, writer, thinker, mountain biker, father and husband ... not necessarily in that order. According to my wife, however, I'm just a big nerd. I have degrees in dead languages and ancient stuff. I have studied in various Jewish institutions, including an Orthodox yeshiva in Europe. I get in trouble for making friends with perfect strangers, and for standing on chairs to sing during Shabbos dinner. In addition to being the Senior Rabbi of Simchat Yisrael Messianic Synagogue in West Haven, CT, I write regularly for several publications and speak widely in congregations and conferences. My wife is a Southern-fried Jewish Beltway bandit and a smokin' hot human rights attorney... and please don’t take offense if I dump Tabasco sauce on your cooking.
View all posts by Rabbi Joshua →
This entry was posted in Uncategorized and tagged New Testament, Prayer, Spirituality, torah, Yeshua. Bookmark the permalink.