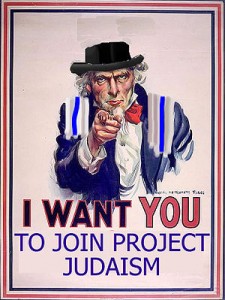 There is a common misconception, particularly within the Messianic Jewish blogosphere, that conversion to Judaism is a post-biblical, and rather late “rabbinic invention.”

However, very few people have really taken the time to trace the development of conversion (גיור‎, giyur), and particularly its widespread existence already by the time of the Second Temple period (i.e. before the development of what we commonly understand as ‘Rabbinic Judaism’).

This blog post is an expansion of my comment to a particular discussion on Rabbi Derek Leman’s blog, Messianic Jewish Musings.

We should acknowledge that the Torah and earliest portions of the Tanakh do not clearly define conversion, or describe a specific process. With that said, however, the question of how to include non-Jews fully into the community of Israel has always been an issue of discussion.

The Torah actually recognizes the participation of Gentiles within the community life of Israel, alludes to various types of “sojourners” (gerim), and even specifies certain requirements for levels of participation for each of these different types of non-Jews. So although non-Jews were included in many respects, there were also noted differences.

For example, non-Jews may not have been allowed to offer certain sacrifices on the altar in the Mishkan. Another example is the laws of Kashrut. According to Deuteronomy 14:21:

“You shall not eat anything that dies naturally, you may give it to the ger who is within your gates, that he may eat of it … “

We have always valued the participation of non-Jews. This has been true even to the point that there has been an evolving understanding of how to fully include non-Jews, not only as fellow partakers (as gerim), but as full participants in the social and religious life of the Jewish people. As a result, we do get glimpses of the beginnings of some type of conversion in order to bring someone into full inclusion into the community, even in the Torah.

The first glimpse of this is with gerim and Passover. Gerim were not allowed to participate in the eating of the Passover lamb, unless they underwent circumcision (which in later times, would be one of the prerequisites for conversion). This is an example where a religious practice was forbidden for non-Jews, unless they chose to conform to a specific religious rite:

“And when a ger dwells with you and wants to keep the Passover of the L-rd, let all his males be circumcised, and then let him come near and keep it, and he shall be as native-born (Exodus 12:48).”

In this way, the ger was brought into the peoplehood of Israel. Through circumcision one became “as native-born.” Therefore, there was indeed a process for inclusion even if not yet fully developed. Another example that may be relevant to a process of conversion involves non-Jewish women captured in war who could be adopted forcibly as wives (see Deut. 21:10-14).

By the last centuries BCE, there was certainly some sort of recognized conversion process in place. This is supported most clearly in Esther 8:17:

“And in every province and city, wherever the king’s command and decree came, the Jews had joy and gladness, a feast and a holiday. Then many of the people of the land became Jews (מתיהדים), because fear of the Jews fell upon them.”

The term מתיהדים means “became Jewish/to make oneself Jewish.” The Septuagint (c. 2nd cent. BCE) interprets מתיהדים as “circumcised themselves.” The Jewish historian Josephus (c. 1st cent. CE) recounts that “Many of other nations circumcised themselves for fear of the Jews” (Antiquities 11.6.13).

In both rabbinic and scholarly understanding of this period, circumcision is clearly a reference to some type of conversion.

The first century Jewish philosopher, Philo of Alexandria, also discusses proselytes in his work, Special Laws I. In speaking of proselytes, Philo enjoins his own people to treat them respectfully and to guard themselves from jealousy:

“After they have given the proselytes an equal share in their laws, and privileges, and immunities, on their forsaking the pride of their fathers and forefathers, they must not give a license to their jealous language and unbridled tongues … lest the proselytes should be exasperated at such treatment and in return utter impious language against the true and holy G-d” (IX, 51-53).

Thus, it seems clear that conversion is not a “later rabbinic invention,” as we already see it in the Hebrew Scriptures and contemporaneous sources. Additionally, there are even references to proselytes in some of the Apocryphal and pseudopygraphic literature of the Second Temple period.

But what about the B’rit Chadasha? What do the Apostolic Writings have to say about conversion to Judaism?

According to Strongs Concordance, the term proselyte(s) is mentioned four times in the New Testament alone.

-“And there were dwelling in Jerusalem Jews, devout men, from every nation under heaven … both Jews (by birth) and proselytes” (Acts 2:5,10).

-“Now when the congregation had broken up, many of the Jews and devout proselytes followed Paul and Barnabas, who, speaking to them, persuaded them to continue in the grace of G-d” (Acts 13:43).

There is an additional reference in Acts 6:5 to Nicolas from Antioch, “a proselyte to Judaism,” who was among a handful of others chosen by the Jerusalem Council to serve among the Greek speaking Jews.

By the Second Temple period, the concept of proselytes to Judaism was already well-established. These references demonstrate that there was a category beyond that of Godfearers, who were full converts – Jews in every sense of the word.

And the Apostle Luke does not make any judgement against these “Jews by choice.” Rather, he places them in high regard by not only mentioning them, but mentioning them in three places within the book of Acts.

The only seemingly negative use of the term proselyte in the entire NT is Yeshua’s reference to particular Pharisees and scribes who go to great lengths to bring proselytes into the faith, but lead them down the wrong path. In this context, it is not the proselytes who are the problem, but the specific group of scribes and Pharisees he is addressing:

“Woe to you, teachers of religious law and you Pharisees. Hypocrites! For you cross land and sea to make one convert, and then you turn that person into twice the child of hell you yourselves are!” (Mt 23:15)

There is even some interesting scholarship on Acts 16 that supports a theory that Paul had Timothy undergo a type of conversion “because of the Jews who lived in that area, for they all knew that his father was a Greek (16:3).”

So, after a little reflection, it seems that the assumption that conversion to Judaism is a “late rabbinic invention” is indeed false. The beginnings of a process to fully include non-Jews into the Jewish people began very early in Jewish history, maybe as early as the Torah.

However, the solid idea of a recognized conversion was already well established by the time of Yeshua, and the Second Temple period.

I'm a Rabbi, writer, thinker, mountain biker, father and husband ... not necessarily in that order. According to my wife, however, I'm just a big nerd. I have degrees in dead languages and ancient stuff. I have studied in various Jewish institutions, including an Orthodox yeshiva in Europe. I get in trouble for making friends with perfect strangers, and for standing on chairs to sing during Shabbos dinner. In addition to being the Senior Rabbi of Simchat Yisrael Messianic Synagogue in West Haven, CT, I write regularly for several publications and speak widely in congregations and conferences. My wife is a Southern-fried Jewish Beltway bandit and a smokin' hot human rights attorney... and please don’t take offense if I dump Tabasco sauce on your cooking.
View all posts by Rabbi Joshua →
This entry was posted in Uncategorized and tagged Bible, community, Halachah, Jewish History, Jewish life, Messianic Judaism, New Testament, Theology, tradition, Yeshua. Bookmark the permalink.

21 Responses to Conversion in Early Judaism