Ground-Breaking News: The FIRST ecumenical conference of Jewish believers in Jesus in modern times met in Helsinki, Finland June 14-15, 2010 to affirm their Jewish identity, their faith in Yeshua, and their desire for unity.

The term “Jewish Believers in Jesus” is actually a broader category than just Messianic Jews. The former category includes all Jewish people in churches, in Messianic Jewish synagogues, and even unaffiliated who profess faith in and allegiance to Yeshua as the Jewish Messiah.

This conference is ground-breaking because it brought together Catholic, Orthodox, Protestant and Messianic scholars – all of them Jewish – to discuss the global growth of Jewish believers in Yeshua. This is something that has not been done since the earliest centuries of “the Church.” The conference was jointly organized by the Messianic Jewish Theological Institute (MJTI) and the Helsinki Studium Catholicum. A statement was issued affirming the significance of Jewish continuity within the Church, as an ongoing link between its historic beginnings, its present life, and its future hope. The full-text of the statement, and greater detail from the conference will be posted later today on the MJTI website (www.mjti.com). 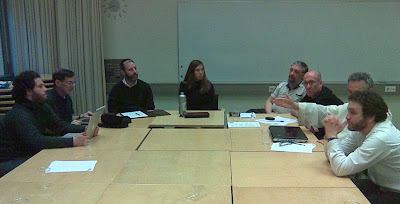 “This was an unprecedented conference bringing together Jews who believe in Jesus as Messiah from a very wide range of communities and traditions. We met together to discuss the presence of Jews in our respective congregations and the issues we face. The increasing number of Jewish followers of Jesus is a phenomenon of great importance, impacting the worldwide Church as it rediscovers the Jewish roots and character of its faith. The presence of Jews in its midst is a resource and means of blessing that the historic churches can not afford to ignore.”

Father Antoine Lévy, OP, Director of the Helsinki Studium Catholicum, affirmed the continuing identity of Jews in their various Christian congregations and offered his own perspective on the unique condition and calling of Jewish disciples of Christ.

“We exist, and despite 2,000 years where the Church and the Jewish people have been separated and often hostile to each other, we are a living bond that demonstrates the Messiah Jesus’ own solidarity with His people, as much as the richness of the heritage of Israel that has been opened up to the Church made up of Israel and the nations.”

Fifteen scholars and theologians from eight countries met for two days of open conference and two days of working sessions to issue a document, the Helsinki Statement (SEE BELOW). Topics discussed included Jewish identity in the Messiah; responding to anti-Judaism and anti-Semitism; the place of Messianic Jewish worship and observance; the Jewishness of Jesus; the biblical, theological and historical background to the present situation of Jewish believers in Jesus; and future plans. The papers delivered at the conference will be published in November/December in Kesher: A Journal of Messianic Judaism (www.kesherjournal.com). A similar event is planned for 2011.

Helsinki Consultation on Jewish Continuity in the Body of Messiah

Jewish believers in Yeshua (Jesus) from England, Finland, France, Germany, Israel, Russia, and the United States met in Helsinki, Finland, on June 14-15, 2010. As scholars belonging to Catholic, Orthodox, Lutheran, and Messianic communities, they began a conversation on Jewish continuity in the Body of Jesus the Messiah. They issued the following statement:

We thank God for bringing us as Jews to the knowledge of Jesus the Messiah, and we express a debt of gratitude to those from the Nations who have transmitted the knowledge of Christ from generation to generation. While we seek to speak on behalf of those who share our Jewish identity and faith in Christ, we have no official mandate from our respective communities. In what follows we are expressing our own deeply held convictions.

At this unprecedented event, we have experienced the depth of our bond, and at the same time we have wrestled with the diversity of our ingrained theological and cultural constructs. In spite of church divisions, we have come together as Jews who believe in Jesus. We hope that sharing the fruit of our common efforts will benefit our brothers and sisters in Christ. We do not aim to issue a definitive declaration, but to initiate an ongoing process of discussion.

There are many Jewish people in the body of Christ. We believe that this reality reflects God’s intention that Israel and the Nations live as mutual blessings to one another. In fact, the Church in its essence is the communion of Jews and those from the Nations called to faith in Christ.

In light of this truth, we think that the life of Jews in the body of Christ has theological significance for that body as a whole. Their presence serves as a constant reminder to the body that its existence is rooted in the ongoing story of the people of Israel. This story resounds throughout the celebration of the liturgical life of the community. We believe that this story finds its center in Israel’s Messiah. We believe that Jews within the body are a living bond between the Church and the people of Israel. Accordingly, we would like to explore concrete ways in which Jewish people may live out their distinctive calling in the body of Christ.

Finally, we wish to express to our Jewish brothers and sisters who do not share our faith in Jesus the Messiah that we consider ourselves to be part of the Jewish people and are committed to its welfare.

Signed in a personal capacity by:

I'm a Rabbi, writer, thinker, mountain biker, father and husband ... not necessarily in that order. According to my wife, however, I'm just a big nerd. I have degrees in dead languages and ancient stuff. I have studied in various Jewish institutions, including an Orthodox yeshiva in Europe. I get in trouble for making friends with perfect strangers, and for standing on chairs to sing during Shabbos dinner. In addition to being the Senior Rabbi of Simchat Yisrael Messianic Synagogue in West Haven, CT, I write regularly for several publications and speak widely in congregations and conferences. My wife is a Southern-fried Jewish Beltway bandit and a smokin' hot human rights attorney... and please don’t take offense if I dump Tabasco sauce on your cooking.
View all posts by Rabbi Joshua →
This entry was posted in Uncategorized and tagged Chasdei Yeshua, Jewish Believers, Jewish History, Jews in the News, Messiah, Yeshua. Bookmark the permalink.