The value of the person in the crowd 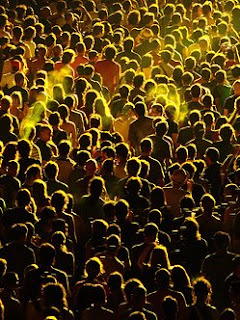 Parashat Bamidbar
This week’s Torah portion, Bamidbar (‘in the desert’), begins the book of Numbers. The book is called Numbers in English after the census taken at the beginning of the parasha. The act of counting individuals seems quite trivial and without meaning. In addition, the census seems to appear out of nowhere. As such, what is the purpose of the census?
The Hebrew of the text provides an answer. The literal translation of the phrase, “take a census – se’u et rosh” is “lift up the head.” According to Chasidic thought, the purpose of the census was to reach out to the core of the Jewish soul. When each person is counted, everyone is equal. No one is counted twice and nobody is skipped. The famous commentator Rashi adds that because the Jewish people are precious to G-d, “He counts them all the time.”
The census was meant to level the playing field and show equality and value of every single individual. Each person has a purpose.
This concept is emphasized even further in the parasha. Detailed instructions are given as to the order of the camps and the specific roles of the cohanim within the Tabernacle. Great care is taken to emphasize that not everyone can do every job. The Levite cannot do the job of the Cohen, and vice verse. And a general Israelite cannot do either of their jobs. And yet, the entire Tabernacle cannot function without each person working together to perform their individual role. For when each person accomplishes their own assigned tasks, the entire puzzle is brought together.
You and I may not be a Cohen, or even a Levite. But we do have a unique role to play. The Torah tells us that each one of us is created “b’tzelem Elohim – in the image of G-d (Gen. 1:27).” We are partners with G-d in bringing redemption into the world. We are called to infuse holiness into the world around us. A Jewish understanding of holiness requires action. Just as Yeshua taught,

According to the great Jewish thinker, Abraham Joshua Heschel,

“The question of religion is what we do with the presence of G-d: how to think, how to feel, how to act; how to live in a way compatible with our being created in the image of G-d.”

Just as the cohanim acted, existed, and served within the Holy; so are we to do. Our challenge is to ask ourselves, “are we a reflection of HaShem, serving in our own unique role within G-d’s sanctuary for the service of our community, the restoration of Israel, and the redemption of the cosmos?” If not, what is holding us back?

I'm a Rabbi, writer, thinker, mountain biker, father and husband ... not necessarily in that order. According to my wife, however, I'm just a big nerd. I have degrees in dead languages and ancient stuff. I have studied in various Jewish institutions, including an Orthodox yeshiva in Europe. I get in trouble for making friends with perfect strangers, and for standing on chairs to sing during Shabbos dinner. In addition to being the Senior Rabbi of Simchat Yisrael Messianic Synagogue in West Haven, CT, I write regularly for several publications and speak widely in congregations and conferences. My wife is a Southern-fried Jewish Beltway bandit and a smokin' hot human rights attorney... and please don’t take offense if I dump Tabasco sauce on your cooking.
View all posts by Rabbi Joshua →
This entry was posted in Uncategorized and tagged holiness, Pieces of Parasha, torah. Bookmark the permalink.