Posted on May 13, 2010 by Monique
My friend Laura Waters Hinson has been busy promoting her fantastic documentary film titled “As We Forgive Those.”
The film follows two women, both survivors of Rwanda’s recent genocide, as they confront their families’ murderers, released from prison through Rwanda’s gacaca court system. (It is noted for its use of community members as both judge and jury, for the tightrope it walks between reconciliation and justice, and its choice to send the architects and leaders of the genocide to international tribunals, while focusing on the “little guys.”) The question the film asks is whether reconciliation is truly possible in the context of horrific atrocities.
The answer, thank G-d, is a resounding yes.
Hitting Close to Home
The first time I saw the film (during a small screening in a coffeehouse in Washington, DC … well before Laura began winning awards and attracting international headlines) I was deeply moved. As a grandchild of Holocaust survivors, I have often struggled against the impulse to hate, to seethe, and to seek revenge against the enemies of the Jewish people (both past and present). I have no way of knowing whether my grandparents and great-grandparents – who were directly targeted for persecution, imprisonment, deportation, torture, and murder – struggled the same way. Ours is a German family, where facts are discussed more readily than feelings.
What I know intimately is just how potent genocide is … how in addition to destroying lives in the here and now, its effects trickle down into the succeeding generations of survivors. I know how we live simultaneously with paranoia, gratitude, guilt, and anger. I tend to take pride in the fact that my grandfather (who after escaping Germany served in U.S. army intelligence) helped liberate Dachau, and my uncle (who also served in the military after escaping the ghetto) hunted down Nazi war criminals to face prosecution at the Nuremberg tribunals and other courts. It is my family’s participation in “justice” that I relish. And I don’t think my pride is misplaced. It’s just that after justice we need healing … and that’s something that feels elusive to me.
Meeting a Recent Survivor 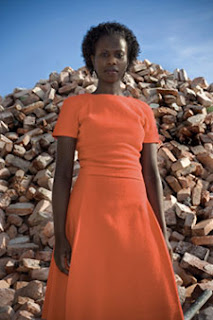 While in college, I befriended Agaba Bisengo, a young Rwandan woman whose family was killed in the genocide while she and her sister were sheltered in Uganda. She invited me to stay with her surviving relatives at their home in Silver Spring, Maryland over a spring break. Agaba and I became fast friends. She often introduced me to others in the Rwandese community with this disclaimer: “Don’t worry, she’s not really muzungu [a colonialist foreigner]. She’s Jewish!”
The Rwandese, unlike my German grandparents, it turns out, are much less reticent to talk about the genocide and their reactions to/recovery from it. Sitting on the sofa drinking tea with the Bisengo’s ongoing stream of visitors (mostly fellow survivors working for the Rwandan embassy in DC), I was struck by the resilience, empathy, and hopefulness of Agaba and her friends. Reconciliation had made them neither idealistic nor naive, and in no way did they stop mourning their relatives who had been murdered. “Is this what my grandparents talked about when their friends (fellow survivors living in Queens, NY) came over?” I often wondered. Did they cope in the same way? Did they maintain any sense of hope for the future? Did they even entertain the prospect of forgiveness … or was that unthinkable?
Agaba is now working on an MBA, working for one of my former employers, and recently married and gave birth to a beautiful baby boy. Although most of the Rwandese I meet are thrilled to meet a Jewish person and bear reverence for our experience as survivors of ongoing persecution (I often hear, “Oh my goodness! I’ve always wanted to meet a Jew! This is amazing!”), I often feel that we have as much to learn from them as they from us.
Why Watch the Film?
Watching “As We Forgive Those,” I could not help empathizing with these two women, forced to pick up their lives from the ashes and to live side by side with the men who they watched literally hack their families into pieces. And yet I also could not deny their obvious transformation upon choosing to forgive the unthinkable.
It is a powerful film, one that I hope to soon bring into our synagogue and into synagogues all over the world.

Chocoholic, jazz head ... prone to rants, and a professional pitbull. I married a terrific guy who happens to be a rabbi, so I guess that makes me a rebbetzin. Who saw that one coming? My grandparents survived the Shoah and spent their lives in the service of others. On my best days, I walk in their footsteps.
View all posts by Monique →
This entry was posted in Uncategorized and tagged genocide, holocaust, human rights, reconciliation, women. Bookmark the permalink.