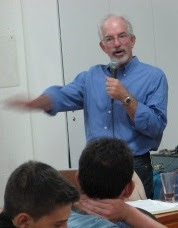 Rabbi Russ Resnik wrote a very great blog post yesterday titled Cinco de Mayo and the Jews in which he discusses Cinco de Mayo itself, and ethical considerations concerning the recent Arizona immigration bill. The article is well worth reading, but here is just a taste:

“Sure, a nation has the right and even responsibility to maintain its borders, but the believer has the responsibility to respect and be concerned for the alien, even the one who snuck in illegally, or who doesn’t show much inclination to drop his Spanish, forget about ­Cinco de Mayo, and assimilate. We can argue some other time about how respect and concern should play out, but surely they will avoid the harsh anti-immigrant rhetoric that is employed without much thought at times by those who claim to follow Yeshua.”

I'm a Rabbi, writer, thinker, mountain biker, father and husband ... not necessarily in that order. According to my wife, however, I'm just a big nerd. I have degrees in dead languages and ancient stuff. I have studied in various Jewish institutions, including an Orthodox yeshiva in Europe. I get in trouble for making friends with perfect strangers, and for standing on chairs to sing during Shabbos dinner. In addition to being the Senior Rabbi of Simchat Yisrael Messianic Synagogue in West Haven, CT, I write regularly for several publications and speak widely in congregations and conferences. My wife is a Southern-fried Jewish Beltway bandit and a smokin' hot human rights attorney... and please don’t take offense if I dump Tabasco sauce on your cooking.
View all posts by Rabbi Joshua →
This entry was posted in Uncategorized and tagged Quote of the Day. Bookmark the permalink.