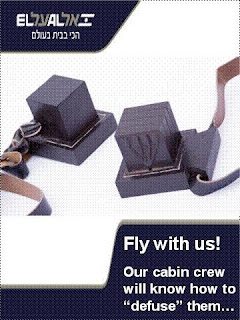 I travel often. Sometimes I get a little extra attention going through security because of my yarmulke, but I’m used to it. To me … it is just another “perk” of being Jewish.

However, this weekend I had the worst experience of my life going through security at BWI (Baltimore International Airport). After an initial frustration with security, I had to go back out to the airline check-in counter, and then back through security a SECOND TIME. And during all this I had a TSA security guard following me around.

During the second time going through security I was pulled aside, patted down by multiple agents, run through a couple different machines, and swabed numerous times for explosive residues. On top of it … my bag was rummaged through, also checked repeatedly for explosive residues, and the agents were very nervous about my tefillin and siddur. Apparently these agents don’t know the difference between Hebrew and Arabic.

I tried to explain to them that it was all a misunderstanding. However, they did not care (as usual). So after almost missing my plane, being harrassed repeatedly, and most of my toiletries now gone just to appease their nerves, I flew off to Southern California for a second time in a two-week period.

Many readers may be reminded of a similar story that happened in January when a US Airways flight was diverted after a Jewish teen’s tefillin and prayers in Hebrew sparked a bomb scare while in flight. And I have heard of similar experiences from other observant Jews.

The point of my ranting: Airport security personnel should really receive training on what they should actually be looking for. These people have no clue. And it is so frustrating.

I'm a Rabbi, writer, thinker, mountain biker, father and husband ... not necessarily in that order. According to my wife, however, I'm just a big nerd. I have degrees in dead languages and ancient stuff. I have studied in various Jewish institutions, including an Orthodox yeshiva in Europe. I get in trouble for making friends with perfect strangers, and for standing on chairs to sing during Shabbos dinner. In addition to being the Senior Rabbi of Simchat Yisrael Messianic Synagogue in West Haven, CT, I write regularly for several publications and speak widely in congregations and conferences. My wife is a Southern-fried Jewish Beltway bandit and a smokin' hot human rights attorney... and please don’t take offense if I dump Tabasco sauce on your cooking.
View all posts by Rabbi Joshua →
This entry was posted in Uncategorized and tagged Rants. Bookmark the permalink.