Posted on February 10, 2010 by Rabbi Joshua
Update 2/11/10:
Today I’m writing after phase II of Snowmageddon, which has left a total of 55″ of snow, thousands of people (still) without power, and streets buried in snow. Some say the last time DC experienced this much snow was in the late 1700’s. Thank G-d – this time we did not lose electricity. 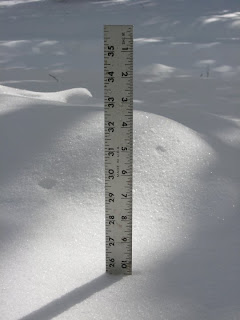 We recognize the blog has been a little silent lately. With our participation at the Hashivenu forum aside, this was partly due to our being a little buried in snow …

Last Friday, February 5th the mid-Atlantic region of the East Coast was hit by a huge storm that has since been called a number of creative names …. Snowpocalypse, Snowmageddon, Snotorious B.I.G., Flurricane, Snoverkill, etc.

Our power went out almost immediately Friday evening and we had no power for four days (until Monday). So we spent our weekend primarily cold and in the dark. The storm brought with it over two feet of snow, crippling businesses and schools across the DC metro area.

And now, we are currently experiencing part II of the storm. Beginning yesterday (Tuesday), another storm is hitting us with high winds and more snow. In fact, the prediction is for another foot of snow on top of what we already have. So here we are, snowed in another day …

We’re definitely looking forward to some sense of normalcy … and sunshine!

1 Response to Snowed In