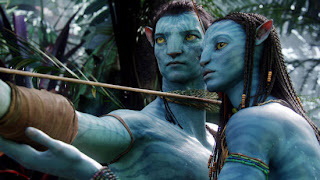 This past Sunday, I saw Avatar in 3-D for the second time. Both times seeing the movie I was blown away with what James Cameron was able to do, and how the technology even made it seem almost (I said almost) believable. It truly is an incredible film.
Now, before proceeding, I acknowledge the film has some shortcomings. It has of course been deemed by some as an apologetic for pantheism, and is definitely another example of a “White Messiah complex“ in regard to racial fantasy.

However, other people have already written exhaustively on those subjects. As a rabbi, what I left the theater thinking about are the many themes common between the film and Judaism.
We are an ancient people. At our roots, we are a tribal people with a tribal language, a tribal culture, and a tribal land. As a result, to really get to the essential core of the Jewish people, we have to peel away the layers of the last 3,000 years.
There are three central tenets of Israel – G-d, the Land, and the People. Interestingly, these are three of the same common themes in Avatar.
HaShem
Although we are monotheistic and not a pantheistic people, we Jews understand that everything originates from, and is interconnected to a single source. And that source, HaShem, still interacts with, and is heavily involved in, the world we live. And just as we have an Etz Chaim, a tree of life that stands at the center of Gan Eden, so too the Na’vi have their sacred tree centered in their sacred land.
The People
The Na’vi refer to themselves as “the People,” similarly to how we Jews refer to ourselves. We refer to all of our fellow ‘tribesmen’ as Am Yisrael – the people of Israel. And just as the Na’vi are interconnected with each other, so is every Jewish person. We have a phrase from the Talmud, “Kol Yisrael arevim ze ba’ze – All Jews are responsible for one another (b. Shavuot 39a).” We are directly responsible for what happens to other Jewish people across the world. And our tradition teaches us that when one Jewish person in the world is hurting, so we all are.
The Land
The movie takes place on Pandora, a lush Earth-like moon of the planet Polyphemus, in the Alpha Centauri star system. Pandora is sacred to the Na’vi, and the Na’vi are interconnected to Pandora through a vast bio-botanical neural network that all Pandoran organisms are connected to. We Jews also have a very special connection to Eretz Yisrael – the Land of Israel. Through this special bond, throughout the last 2,000 years we have prayed daily for our full return to the Land.
If we could look into the future of the Na’vi, we might see another similarity. The destruction of Hometree is extremely significant. As Dr. Augustine, one of the main characters argues, the destruction of Hometree could affect the vast bio-botanical neural network that all Pandoran organisms are connected to, thereby changing forever not only the Na’vi, but Pandora itself.
In the year 70 CE, we Jews experienced a similar catastrophe that rocked the Jewish world. The destruction of the Temple in Jerusalem, and the expulsion of Jews from our land, dealt such a tremendous blow to the Jewish people that it took centuries to recover from. There are even some who would argue we have not fully overcome it even 2,000 years later! 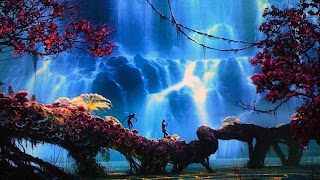 Lastly, the word Na’vi in Hebrew means a ‘prophet.’ Despite its shortcomings, there are also a number of themes within Avatar we would do well to heed. As Jews, we need to recognize that stewardship of our land, its resources, and one another are not just themes of another culture, but deeply embedded within our own culture and texts.
The Torah has much to say on social justice, human rights, stewardship, care of the land, and the value of life – all life. The Torah teaches us that even the smallest creatures are not overlooked by our Creator.
So you may not agree with the pantheistic elements or the racial fantasy of ‘another White Messiah’ who ends up becoming the savior of all the ‘poor natives.’ But, if you have not seen Avatar, go see it! I recommend seeing it in 3-D if possible. Despite its shortcomings it really is a film worth seeing on the big screen. And keep in mind that many of its lessons are found right in Jewish Scripture.

I'm a Rabbi, writer, thinker, mountain biker, father and husband ... not necessarily in that order. According to my wife, however, I'm just a big nerd. I have degrees in dead languages and ancient stuff. I have studied in various Jewish institutions, including an Orthodox yeshiva in Europe. I get in trouble for making friends with perfect strangers, and for standing on chairs to sing during Shabbos dinner. In addition to being the Senior Rabbi of Simchat Yisrael Messianic Synagogue in West Haven, CT, I write regularly for several publications and speak widely in congregations and conferences. My wife is a Southern-fried Jewish Beltway bandit and a smokin' hot human rights attorney... and please don’t take offense if I dump Tabasco sauce on your cooking.
View all posts by Rabbi Joshua →
This entry was posted in Uncategorized and tagged community, human rights, Movies, social justice, Totally Gratuitous. Bookmark the permalink.

5 Responses to Avatar: A Jewish Spin