Jews, Exile, and the Murashu Archive of Nippur 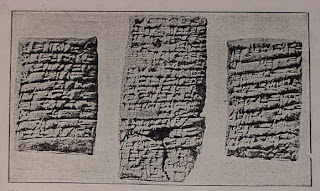 In May of 1893, while clearing collapsed debris from a room overlooking the ancient ruins of Nippur, a group of Kaffej workmen made a startling discovery. Buried beneath the rubble they discovered a number of clay tablets.[1] The excavators quickly worked to clear the debris and within a few hours recovered a total of seven hundred and thirty tablets buried beneath layers of rubble.

The location had once been used as a business archive by the wealthy and influential Murashu family of Nippur who lived in the 5th Century B.C.E. – during the reigns of the Persian kings Artexerxes I and Darius II (coinciding with the Biblical account of Ezra and Nehemiah).

Although not commonly known about, the Murashu archive provides invaluable information for multiple areas of study, including the History of Ancient Finance and Commerce, Biblical Studies, Linguistics, Paleography, Onomastics, Archaeology, and more.

The bulk of the inscriptions, aside from a usual cylinder seal impression here and there, are in Cuneiform – similar to other Near Eastern Archives. Yet many of the tablets bear a second inscription or endorsement – a paleo-form of Aramaic – a Semitic and alphabetic language that would eventually replace Cuneiform as the Lingua Franca of the ancient world.

Additionally, we see a large number of foreign names and titles introduced into the Babylonian sources. The bulk of “borrowed” words are Semitic in origin due to a growing number of West-Semitic peoples introduced to the Nippur Region.

According to Michael David Coogan:

Names [containing] –yaw do not occur in Neo-Babylonian sources before the [Israelite] Exile, and their increasing frequency in the late sixth and fifth centuries can reasonably be associated with the gradual emancipation and increased prosperity of Judean exiles in Mesopotamia.[3]

A large number of these Jewish exiles were carried away by Nebuchadnezzar and settled in the region of Nippur. In fact, an unusually large number of Jewish names known from the Hebrew Bible (especially from the books of Ezra and Nehemiah), eventually find their way into Cuneiform texts and inscriptions, including the Murashu archive.

The prophet Ezekiel also mentions in multiple places “the community of the exiles by the Chebar Canal (for example, see Ezek. 1:1)”

These references suggest that the growing number of Jewish exiles began to hold positions of prestige, and conducted business like everyone else. Some references seem to support that a few Jews may even have amassed great wealth which would support the Biblical claim to large contributions of silver, gold and precious goods towards the rebuilding of the Temple in Jerusalem (see Ezra 1:5-6 and 2: 68-69).

Despite the distance of time and space, these clay tablets still speak of a story long forgotten. For within the Murashu archive is a wealth of knowledge. Despite their having been recovered now for over 100 years, much work is still to be done. Further study needs to be carried out on the texts, those that produced them, and their influence for us today. Indeed, William Goetzmann of Yale University was on to something when he connected the Murashu archive to that “of a modern mystery full of intrigue.”[4]

I'm a Rabbi, writer, thinker, mountain biker, father and husband ... not necessarily in that order. According to my wife, however, I'm just a big nerd. I have degrees in dead languages and ancient stuff. I have studied in various Jewish institutions, including an Orthodox yeshiva in Europe. I get in trouble for making friends with perfect strangers, and for standing on chairs to sing during Shabbos dinner. In addition to being the Senior Rabbi of Beth Emunah Messianic Synagogue in Agoura Hills, CA, I write regularly for several publications and speak widely in congregations and conferences. My wife is a Southern-fried Jewish Beltway bandit and a smokin' hot human rights attorney... and please don’t take offense if I dump Tabasco sauce on your cooking.
View all posts by Rabbi Joshua →
This entry was posted in Uncategorized and tagged Ancient Near East, Archaeology, Bible, Jewish History. Bookmark the permalink.

8 Responses to Jews, Exile, and the Murashu Archive of Nippur