Quote of the Day: "Where have all the Men Gone?" 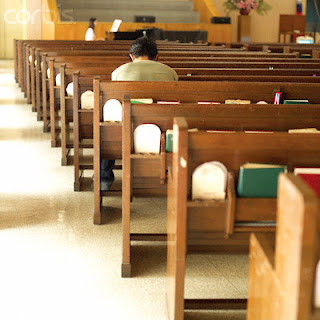 Balance. Something we are supposed to always have, yet often lack. Yinon is our understanding of Jewish life – progressive, yet traditional. Empowering, yet leading. This understanding also extends to the participation of men and women in Jewish ritual life.

I have long been an advocate for the spiritual empowerment of women within Judaism, and have been especially vocal in support of women being ordained as rabbis within Messianic Judaism.

And although I agree women should be empowered within ritual life, I am at the same time growing more aware that men are disappearing from ritual life. And not just in Judaism. We are also seeing other faiths address this issue. For example, I was recently made aware of a book called, Why Men Hate Going to Church, written from a Christian perspective.

The reasons are complex and are far more complicated. However, I and others are convinced that finding balance is the key. The answer is not to stop empowering women. It should not be a choise of one over the other. The answer will be in finding ways to empower men as men, and women as women – to reach our fullest potentials TOGETHER as being B’tzelem Elohim – created in the image of G-d. Our quote of the day is taken from a recent interview on Jewcy with Rabbi Marcelo Bronstein, one of the rabbis of Congregation B’nai Jeshurun in New York City – by far one of the most vibrant and successful synagogues of our time.

I am a product of the feminist revolution, so the fact that women lead most of the activities of our congregation never bothered me. I have always thought that the people who want to get involved, will get involved. I never paid attention to whether those people were men or women. But suddenly, I began to hear people talk, and began to listen to others and even pay attention to what it was in front of my eyes. Also recently, I participated in a conversation at NYU on gender and education. Speakers said that finding a male educator, a male teacher in New York, would be very soon like finding a diamond in the street. They are that rare.

So, before starting the group I went to talk to a feminist friend. I told her I wanted to start a men’s group, and asked her opinion. She said, I love what you are doing. Why, I asked. She said, In the beginning, feminists chopped the testicles off men. That was a necessary act of war. Afterwards, when we achieved some equality, we sat and cried. Where are the men? They oppressed us, so we castrated them. So I like that you are trying to celebrate the differences without imposing power.

I'm a Rabbi, writer, thinker, mountain biker, father and husband ... not necessarily in that order. According to my wife, however, I'm just a big nerd. I have degrees in dead languages and ancient stuff. I have studied in various Jewish institutions, including an Orthodox yeshiva in Europe. I get in trouble for making friends with perfect strangers, and for standing on chairs to sing during Shabbos dinner. In addition to being the Senior Rabbi of Simchat Yisrael Messianic Synagogue in West Haven, CT, I write regularly for several publications and speak widely in congregations and conferences. My wife is a Southern-fried Jewish Beltway bandit and a smokin' hot human rights attorney... and please don’t take offense if I dump Tabasco sauce on your cooking.
View all posts by Rabbi Joshua →
This entry was posted in Uncategorized and tagged community, identity, Jewish life, nexgen, practical suggestions, Quote of the Day, Spirituality, Synagogue. Bookmark the permalink.

45 Responses to Quote of the Day: "Where have all the Men Gone?"