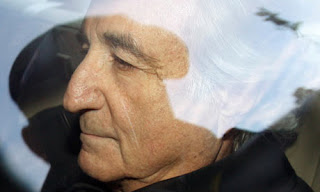 In case you needed another reason to spit when you say “Bernie Madoff,” the New York Times reports today that Madoff’s investment fraud is threatening the livelihoods of Israeli musicians. The America-Israel Cultural Foundation, as it turns out, invested its entire $14 million endowment with Madoff, and saw it all go to smoke this past fall. AICF, whose scholarships have provided a “stamp of approval” for acclaimed Israeli musicians, including Itzhak Perlman (who performed at this year’s Presidential inauguration) and Pinchas Zukerman has slashed it scholarship program drastically.

In Israel, an A.I.C.F. scholarship is commonly referred to as a keren, Hebrew for foundation. Young players use the term as in, When is your keren? Did you get a keren? How much is your keren?

It is beyond appalling that a fellow Jew would rip off his kinsmen with such gargantuan flair. His victims included no less than Holocaust survivor and Nobel laureate Elie Wiesel. Elie Wiesel! As Rob Eshman at the LA Jewish Journal described his reaction:

The man survives Auschwitz, lives to serve as the moral conscience of the world, then in the twilight of his noble life sees his charitable wealth destroyed by a fellow Jew. No one could plumb the darkness of a soul that could do such a thing, not even Wiesel.

As Rob Eshman goes on to explain, the blame does not fall exclusively on the shoulders of our decade’s greatest swindler. The American Jewish community’s “Big Macher Syndrome” provides fertile ground for opportunistic liars like Madoff:

We have rabbis who shut their mouths rather than risk alienating a potential donor. Sure they’ll preach tikkun olam and charity from the pulpit, but how often do they preach modesty, humility and moderation? People are telling me the Madoff scandal all boiled down to one word — greed. But it’s not so simple. Madoff didn’t just want money, he wanted the immunity that being a big shot, a macher bestows upon all sorts of cheats, dimwits and blowhards in the Jewish community.

Which begs the question, are the same norms operative within our own community? We may not have enough wealth in our midst to contemplate a Madoff scenario. But the mechanics of prestige and power don’t always need money to grease their wheels. Have we built up individuals in our midst so dramatically that we offer them unprecedented opportunities for abuse … setting them (and their victims) up for a cataclysmic fall from grace? Who throws their weight around in our shuls and institutions, and does our outsized admiration have a role in building the pedestal(s) on which they stand?

It turns out Madoff’s travesty teaches us a lesson we’d do well to remember.

Though I’m still not sure the lesson is worth $50 billion.

Chocoholic, jazz head ... prone to rants, and a professional pitbull. I married a terrific guy who happens to be a rabbi, so I guess that makes me a rebbetzin. Who saw that one coming? My grandparents survived the Shoah and spent their lives in the service of others. On my best days, I walk in their footsteps.
View all posts by Monique →
This entry was posted in Uncategorized and tagged ethics. Bookmark the permalink.