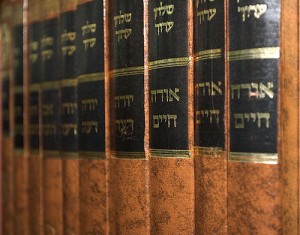 The Torah is a code which assumes a community tradition to fill in its gaps. That is, the Torah does not spell out how to carry out many of its commands. The details of procedure are often left to the people. And the intention of Torah is clearly not to arrive at a situation like that in the book of Judges, where “every man did what was right in his own eyes.”

In matters of legal judgment, the Torah’s gaps were to be filled in by judges and by a sort of high court (Deut 17:8-13) and the people are not to turn to the right or to the left from the rulings of Israel’s judges. In matters of worship procedure and liturgy, the Levitical priests are the ones who determine the practice of the community.

The problem with Torah Fundamental #2 is that modern readers of the Bible tend to prefer the “every man does what is right in his own mind” ethic of our time. Tradition is a bad word. Authority in the hands of a group of people, such as the rabbis, is deemed oppressive and false. The Bible means what it means to me and no one should dictate procedure or tradition. How does Israel’s tradition work and how can those who want to know Torah respect the tradition?

Here is a problem that occurs often in our time: a person discovers Torah coming from a free church tradition and becomes “Hebraic” or “Messianic” and they read Torah as a free thinker descended from the Enlightenment. The people who fall into this trap generally don’t realize that they are reading Torah in a modernist mode. They think they are being true to the Bible.

The common error of this type of reading is to think it is the job of their tiny community to make up its own practice and ignore the Tradition of Israel. That is why we see so many “Messianic” websites and personalities — I’m embarrassed to say this — declaring their own dates for Passover and other festivals and new months. I cringe when I read about some self-authorized leader who sends to his followers an email, “I have sighted the new moon in Jerusalem and I declare that such and such is the start of the month of Nisan.” And, sadly, thousands of people read and follow these recommendations.

The calendar of Israel was fixed in the time of Hallel II in about the year 360 CE (and likely there were adjustments with the final system of a 19-year cycle being perfected by 700 CE). This is the tradition of Israel. It is fixed by the judges of Israel, the rabbis. And those who say they follow Torah should follow Deuteronomy 17:8-13, turning neither to the right or the left.

There are many other examples of Torah Fundamental #2. The point is you cannot follow Torah from the written Torah alone. This goes against the grain of many people from a Christian background who have the assumption of sola scriptura (scripture alone). Scripture alone does not tell you how to do everything God commands. Therefore the people of Israel developed traditions. Here are some examples:
-Lighting candles on Friday night with blessings over bread and wine.
-Lighting a havdalah candle and observing a ceremony of ushering out the Sabbath on Saturday night.
-The liturgy at the Temple with Psalms and processions which we see reflected in the book of Psalms (the Siddur of the first and second Temple).
-The traditions of the festivals such as the Passover Seder, the night of study at Shavuot, the series of shofar blasts at Rosh HaShanah, the fasting customs of Yom Kippur, the specifications for a Sukkah, the advent of Hanukkah and the requirement of Hanukkah lights, and so on.
-The procedures of the mikvah (immersion for purification).
-The communal prayers of Israel in the Siddur (Amidah, Shema, Kaddish, etc.).

To follow Torah as a non-Jew (most people in the Messianic and Judeo-Christian streams are not Jewish) should mean to keep Torah alongside Israel. To disrespect the traditions of the people of Israel, of the rabbis, is to disdain Torah itself. Those who wish to take up Torah voluntarily and to practice it with the Jewish people should not be deceived by silly, self-defined Torah customs.

Torah is about bringing a people together to be near to God as a community. It is communal in nature. And traditions about how to fulfill broad commands are required. Let us keep Torah together with the historic community of Israel and that is the only valid Torah there is.