The Controversy of Zion 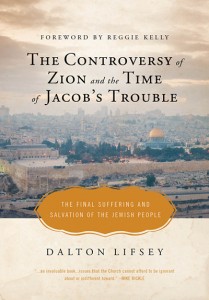 The Controversy of Zion and the Time of Jacob’s Trouble, Dalton Lifsey, Tauranga: Maskilim Publishing, 2011.

Dalton Lifsey is a pastor in New Zealand and he has something to say about Israel and the end times that is slightly different than others who have written this sort of book before.

This is a refreshing book of interpretation of prophetic hope concerning the Jewish people, the land of Israel, and the events leading up to the return of Yeshua. Let’s consider some of the strengths of Lifsey’s book, including the encouraging signs of a maturing Christian love for Jewish people, and some flaws as well, including the problematic cherry-picking approach to prophetic promises.

CHRISTIANS UNIFIED WITH THE JEWISH PEOPLE
Lifsey is very strong on the ethical and spiritual requirement for followers of Jesus to stand against anti-Semitism, to be brothers and sisters with the Jewish people, and prepared in a coming time of unparalleled suffering to support Jewish people against a world set on Jew-hatred. He takes Paul’s olive tree analogy in Romans 11 very seriously, and find much support for gentile brotherhood with Israel in the prophets as well. Christians are mutually dependent with the Jewish people in the plan of God. There is union and distinction at the same time between Israel and the Church (it sounds like Lifsey would be open to bilateral ecclesiology as in Mark Kinzer’s Postmissionary Messianic Judaism).

One of Lifsey’s beliefs about the end times is of a coming time of world hatred leading to unprecedented violence against the Jewish people. It is the idea of Armageddon and the numerous passages about the nations attacking Israel at what seems to be the end of the age just prior to divine intervention and the Messianic Age. Yet Lifsey sharpens the image, being concerned that the final devastation for Jewish people will exceed even the Holocaust. He is persuaded of this because of a connection he makes between various scriptures which refer to suffering as has never been before:

Lifsey says of the Church’s responsibility and divine calling in the time of Jacob’s trouble:

The escape and expulsion of the Jews from their crippled and war-torn state will dramatically impact the Church among the nations. In the coming days when the violence begins, potentially millions of Jews will take to flight “among the nation” (Amos 9:9-10), seeking refuge from their tormentors (Isa 51:23). They will need to be received and served by those who anticipated their arrival. Much like Corri ten Boom and her family who secretly housed and protected Jews during the Nazi Holocaust, so also will the Church in the great tribulation be called upon to serve disoriented, panic-stricken, and traumatized Jews.

READING PROPHECY WITH LIFSEY
There are differences between Lifsey’s prophetic timeline and the usual theories offered, especially by Christian Zionists and Dispensationalists. Our people’s present place in the land is not guaranteed, contra the Christian Zionists, but the promises of absolute divine security for Israel in the land seem to Lifsey to be about the regathering to come when Messiah appears and not about the current gathering to Israel. Lifsey does believe the prophets foresaw Israel regathered without yet being renewed, as in the current state of Israel. Yet he does not think the security promises apply yet. Anything may happen, including another scattering of the people from the land.

Like nearly all prophecy books, Lifsey picks verses here and there which appear to refer to the last days. I cannot argue too strongly against this as I did it myself in The World to Come. What is needed in using verses plucked from their contexts is the hard work of careful study. Is the scripture in question definitely about the final time of the age, is it possibly about the final time, or is it better read as a promise for the nearer context? Lifsey cites hundreds of verses and the reader is at his mercy to decide if he is using them fairly or not. On the other hand, few readers would have the patience to read a 600 page tome with thorough exegesis and thematic examinations of each prophet in context!

The future of this age will see the Temple rebuilt in Jerusalem and a few years later an attack upon Israel and Jewish refugees fleeing the land. Jerusalem will be trampled for three and a half years. An anti-Christ figure will rise and be responsible for this attack and will set up a desecrating sacrilege in the Temple. All nations will become involved and the death toll for the Jewish people will be large. And God will at the climax of the war and suffering send Messiah and the hearts of Israel will melt in love and the greatest renewal in history will commence. Messiah will establish his kingdom, beginning with vengeance upon the attacking armies, and then there will be an age of peace and final regathering of the Jewish people to the land. God will judge the nations, especially Christians, based on their response to suffering Jews. The greatest blessings will be for those who served and supported the chosen people in history’s darkest hour.

RECOMMENDATION
If you have been turned off in the past by books about the end times, Lifsey’s book is refreshing. It is not free from all of the faults of prophecy books, but its maturity is inspiring and its message is encouraging (in spite of the bleak picture of coming suffering for our people, which is not Lifsey’s fault).

You may conclude that Lifsey is wrong about this or that. You may feel that some of Jacob’s trouble has already happened, that it describes Jewish history in general. It is harder to deny the coming Armageddon, which is first and foremost an attack on Israel which is followed by divine vengeance on the attacking armies. These are not pleasant and encouraging thoughts, but if we had lived before the advent of Nazism and knew the death camps were coming, perhaps we all — Jew and gentile — would have been better prepared. Perhaps more Christians would have been Corrie ten Booms. And so it just may be that because of increasingly mature expositions of prophecy that a segment of the Church will be prepared if it should happen that the end of the age comes sooner than later.

In the meantime, The Controversy of Zion and the Time of Jacob’s Trouble is for Christians as much about living now with a love for the Jewish people and in awe of God’s plan as it is about knowing future timetables.

24 Responses to The Controversy of Zion