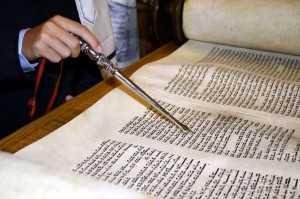 The first point worth learning about Torah seems an obvious one, but in fact it escapes quite a few people. Right from the beginning of the actual enactment of Torah (you’ll see what I mean shortly by “enactment”) this point is emphasized. Yet there are many in our time who, knowingly or not, deny it — and for more than one reason coming from more than one point of view.

Before I state the first point in my list of Torah fundamentals, let me ask: where do you actually find Torah in the Bible? Many would answer quickly: from Genesis through Deuteronomy. But Torah means more than one thing. Torah in the most general sense is teaching. Your mother’s words of wisdom to you are Torah. “Do not reject your mother’s Torah,” says Proverbs 1:8. Torah in many Jewish contexts means the whole system of studying and practicing every facet of divine wisdom (Pentateuch, Hebrew Bible, rabbinic literature, teachings in the study halls, daily life lived out). And the way I mean Torah is a relational covenant between God and Israel.

You find Torah in Exodus 19 through all of Deuteronomy. Torah is found in the codes of commandments, in the covenant instructions, in the curses and blessings of the covenant. And the enactment of Torah begins in Exodus 19, not in Genesis 1.

So, what is the first thing that should be realized about Torah, the fundamental that begins our understanding of the Torah given at Sinai?

Torah is not a covenant made with any nation on earth except Israel, but is rather an eternal, unending code of relationship between God and the specific people Israel. Torah is specific to Israel. It is specific to the land of Israel, so that outside of the land, there are differences in how Torah is kept. It is specific to the people of Israel, the Jewish people, so that the application of Torah principles to non-Jews requires some consideration. And the Torah covenant is for all time. The people with whom this covenant is made cannot be replaced. The terms of the covenant may adapt, there are plenty of examples within Torah and the Hebrew Bible itself of adaptation, but the terms never end.

There are several groups who would disagree with the statement that is in bold print above. Some groups would say that Torah is for all people alike and Jewishness has literally nothing to do with Torah obligation or relationship. Many groups would say the people of Torah can be replaced and that the Torah covenant itself can come to an end. So, let’s consider Torah itself and see where I derived this fundamental of Torah from in the first place, shall we:

APPLYING THE PRINCIPLE THAT TORAH IS ISRAEL’S COVENANT
I try to help Christians understand that Messianic Jews should and must continue keeping Torah, including the identity markers of Israel in the Torah which are Sabbath, dietary law, circumcising male children, marrying Jewish, keeping the appointed times, and so on. These are for all our generations. Messiah did not come and say, “Stop doing Torah now that I am teaching you a new religion.” The confusion about this in Christianity comes from the letters of Paul because of one simple oversight: Paul’s letters are instructions for the gentile churches, where the identity markers of Israel were not prescribed (see Acts 15). Yet Paul himself kept the commandments (Acts 21:20-26) and the Jerusalem Council never assumes Jews will stop keeping them.

I try to help Messianic gentiles (Two-Housers, One Law folk, Sacred Namers, gentiles in Messianic congregations, and so on) understand that it is wrong for a non-Jew to act as if they are suddenly Jewish. It makes a mockery of the eternal covenant of God with the people of Israel, the Jewish people. Being grafted in does not mean you are an Israelite. Furthermore, there is no reason a gentile should want to be a Jew. God loves all his children, though Israel is his firstborn among the peoples. And as a gentile you are invited to keep Torah alongside the people of Israel, but if you do so, it should be with utmost respect for God’s eternal covenant and not as though you are a replacement for his people. You should practice in such a way that it is clear you are a gentile keeping Torah with Israel (e.g., don’t have a Bar Mitzvah and do not use the traditional prayers at your Bris but modify them, etc.).

And I try to help Messianic Jews understand: Torah remains your covenant with God. Many do not realize that the majority of Messianic Jews (and I mean the ones in Messianic congregations, not the tens of thousands of Jews who are in churches) do not keep Torah. Most are Hebrew Pentecostals and Hebrew Baptists (see last week’s post “Types of Messianic Congregations”). It does matter whether you assimilate. It does matter whether you cease making Sabbath holy. It does matter whether you have a Bris for your sons. If you let your faith in Messiah annul the Torah covenant, you are acting as if Jesus is at odds with the Father, as if Christianity replaces Judaism, as if Christians replace the Jewish people, as if God’s promises are null and void. By being a living witness to Torah’s eternality and God’s election of Israel, you are the people at the forefront of Messianic redemption. It is when Israel calls on Messiah that Yeshua will return. So, Messianic Jews, be the people of Messiah, those who are a light within the Jewish people, showing the way to bring Messiah.

This entry was posted in Gentiles, Judaism, Torah. Bookmark the permalink.