How to be a Messianic Congregation, #1 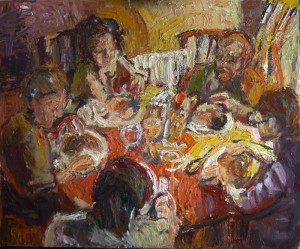 Some of you will remember Benjamin from “Metropolis.” That’s not his real name, of course, nor the real name of his city. I wrote about Benjamin back in early August (see “What a Jew Needs from MJ”).

Well, Bennie spent Rosh Hashanah and Shabbat Shuvah with our congregation (since Metropolis has no meaningfully Jewish and yet Yeshua-believing congregations). And what an experience it was having Bennie with us. It was a delightful experience for me to be able to converse with someone having a broader view of Jewish life, someone with an eclectic Jewish background who keeps up with goings-on in American Jewry.

And in our conversations, which included much about Bennie’s experiences in various Reform, Renewal, Conservative, and Messianic synagogues, I thought about the things that make a Messianic congregation valuable for the people who form its family. I also thought about how Judeo-Christian congregations could do (in my opinion) a better job. In case you don’t know, Judeo-Christian congregation is my preferred term for 90% of what is out there called “Messianic Jewish.” So little of what is out there is Jewish either in practice or membership. I already think we would see a 75% improvement in the genuineness and quality of vision for many congregations if they thought of themselves as Judeo-Christian and quit pretending they were Messianic Jewish.

But all that aside, in this post, I’d like to share my #1 observation via conversation with Bennie — the #1 thing MJ and Judeo-Christian groups are largely not doing (at least in Metropolis) and I think the reason is they tend to base their practice on that of Evangelical and Pentecostal Christian churches. This one missing element is considered vital from Genesis to Revelation in the Bible. It is a hallmark of godliness and community and it is so easy to implement, I can’t believe any church or synagogue tries to go on without it.

The thing I am talking about is, of course, hospitality, and most specifically the Oneg Shabbat as well as a healthy community practice of inviting guests over for Shabbat dinner and for Havdalah.

Hospitality is so important at Tikvat David, I never want a guest to come to our building and not have an optional offering of some kind of sustenance for them. Even those who come to our Hebrew classes and other seminars on Tuesday nights will find at least some tea, water, soda, and granola bars or fruit or some kind of offering. The importance of this little offering of sustenance has been confirmed for me in this semester’s classes as one couple comes straight from their son’s Tuesday night football practice. They have not had dinner by the time they arrive. The little food and beverage we put out is a blessing to them as they settle into Hebrew class every week.

What do I mean about hospitality being important from Genesis to Revelation?

No, I am not going to draw a cheesy lesson from the fact that God placed juicy fruit trees in the Garden of Eden. I was thinking rather of the seminal passage concerning the Jewish mitzvah of hospitality: Genesis 18. If you have not read any good Jewish commentary on the story of Abraham’s three visitors, I encourage you to do so (if nothing else, you can always go to Aish Torah’s website).

I love Abraham’s approach to offering hospitality, which I will paraphrase here:

Abraham saw three strangers walking in the desert and he sprinted toward them thinking, “At last, three wanderers who may not know El Shaddai!”

“My visitors, can I offer you the merest thimble-full of water and morsel of stale bread?”

They agreed to stay whereupon Abraham hurriedly found Sarah, “Kill the fatted calf! Get the servants grinding three seah’s of flour and preparing all of today’s yogurt and curds for our guests!”
–Genesis 18:1-8 (Leman’s Unofficial Version)

Sharing food and rejoicing with friends, strangers, and the needy continues to be a mitzvah throughout the Torah and prophets. Dozens of stories, if not more, confirm this. Think at least of the tithes which were brought to the Temple to share in a great feast, carefully including those who could not bring enough (see Deut 14:22-27).

What about Revelation? Well, we have there the theme of Messiah sharing a great meal with all of the saints and the great banquet table (see Rev 19:9). It is a Jewish theme, the Messianic Banquet. It has sources in places like Isaiah 25:6. The Messianic Banquet finds its way into the Dead Sea Scrolls and other places where speculation about Messiah occurs.

How then can “Messianic Jewish” congregations not have hospitality as one of their main practices. Says Benjamin from Metropolis, “You can’t get a cup of water at any of the places I have visited.” He tells me that rather than an Oneg Shabbat (a luncheon, usually covered dish, for after Saturday morning services), many people at “Messianic Jewish” synagogues in Metropolis go out to restaurants — on Shabbat! He later told me that he figured none of these people were Jewish or Sabbath-observant. But still: where are the Jews (I assume there are some Jews in these congregations, though I may be wrong) eating on Shabbat?

One Messianic leader in Metropolis explained why they don’t have an Oneg Shabbat: “It’s too hard.”

I’m sorry. I don’t understand it. Getting people to bring a dish to share is not only easy, but it is the time around the table where we keep our friendships alive, where we really get to know one another, where people in our congregation become lifetime friends. I can’t imagine thinking of our Shabbat as merely a service we attend and then leave, rather like a movie (but far less entertaining).

The same thing goes for Judeo-Christian congregations. If you want to immediately show an improvement over the Evangelical and Pentecostal churches your people came from, have a covered dish meal after Sabbath services. Practice the Messianic banquet now.

If your meeting place is not conducive to meals, have fellowship meals in as many homes as are required to host everyone.

What I am saying is this, as a leader with some (but not nearly as much as others) experience in leading a congregation, I have found that the greatest blessing every Sabbath is the time we spend together over food and drink. I can only imagine that the impetus for people to hold a service and have people leave is the wrong idea about what a church or synagogue is: a movie theater where we “broadcast” some music and teaching for an “audience.”

A church or synagogue is a people. Pure and simple. We are a people gathering together under Hashem for mutual encouragement, cooperating in doing the mitzvot of God, and sharing resources so that rich and poor alike can rejoice on the Sabbath with joy.

15 Responses to How to be a Messianic Congregation, #1