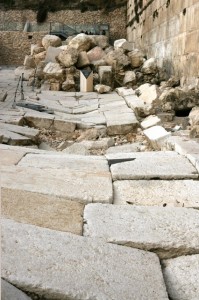 The approaching dissolution of the Jewish economy, and the erecting of the evangelical state, shall set this matter at large, and lay all in common, so that it shall be a thing perfectly indifferent whether in either of these places or any other men worship God, for they shall not be tied to any place; neither here nor there, but both, and any where, and every where.

If you read the Bible forwards (start in Genesis and read in the direction towards the New Testament) you will come away with the idea that the Torah is eternal. If you read the Bible backwards (start with a New Testament reading devoid of Israelite background and then read the “Old” Testament) you can easily think the Torah is a temporary and faulty system. A common reading: God gave Israel a sub-standard, even a worldly Law, one which is about matters of “do not touch” and the elemental spirits of this world rather than the pure vision of angelic realms and eternal glory.

Yuck. I weep for people whose Bible reading proceeds in this manner. It’s like having the grape juice and never the wine. It’s like walking in Yosemite and seeing only the coke cans and cigarette butts. It’s like reading only the end of the romance novel and missing why it seemed impossible for the two to come together — and what’s so great about their love.

A most common area of rejection by New Testament readers is the idea that the sacrifices of the Israelite Temple could possibly have been good in any way. They are a ministry of death. They are, many say, primitive and unworthy of spiritual religion. Called the local chapter of P.E.T.A. and complain. Why should animals die for religion? Excuse me, there is a lot wrong with this estimation. And as we explore Torah and New Testament we must ask, would Yeshua approve of the animal sacrifices and would he ever have participated?

OBJECTION: Yeshua never sinned so he would never have offered a sacrifice. RESPONSE: He was baptized by John. The same logic would suggest he should not have been. Furthermore, animal sacrifices were not only about sin. This objection reveals a lack of knowledge about the way the sacrificial system worked and what it’s purposes were. In my book, A New Look at the Old Testament, I explain the sacrificial system in an easy to read manner.

OBJECTION: Yeshua drove the animals out of the Temple court, so he must have opposed sacrifice. RESPONSE: Two things should occur to us here. First, it seems dangerous to assume that Yeshua opposed a divinely given system. Second, there could be other reasons why Yeshua opposed what was happening in the Temple in his time rather than assuming he opposed the Temple inherently (and “Torah and New Testament, #5” will expound on Yeshua and the Temple, clarifying this).

OBJECTION: Yeshua never affirmed concepts of sacrifice in his teachings. RESPONSE: This is not true. He said, “Didn’t you know that I must be in my Father’s house?” (Luke 2:49). He said, “Which is greater, the gift or the altar that makes the gift sacred? So whoever swears by the altar swears by it and by everything on it” (Matt 23:19-20). He said, “Leave your gift there in front of the altar. First go and be reconciled to your brother and then come and present your gift” (Matt 5:24). While you could argue that “gift” here means the firstfruits, which were placed before the altar (Deut 26:4), it could just as well mean the animal brought for an offering (and “in front of the altar” is a generalization anyway, since in the Second Temple Israelites could not approach the altar directly).

OBJECTION: Animal slaughter is wrong, a ministry of death, and God and Yeshua are about life. RESPONSE: Did God become about life only starting with the New Testament? Of course not, so this argument, if accepted, undermines the entire Bible. Further, the Bible itself acknowledges that killing animals is not the highest good and looks to a day when death no longer reigns (many verses, but consider Genesis 1:29; 9:1-5; Isa 11:6-9; Rev 21:22). Killing animals is something destined to cease, but while death reigns, ritual slaughter serves a purpose that outweighs the evil of death. God redeems death and the Temple in its glories is part of that redemption.

Death is the current reality. God, like it or not, is not yet causing death to cease. He is hidden and his redemption and perfection of all things follows a path which is hard to understand. Faith is difficult. The sacrifices draw the worshipper nearer to God’s Presence than any other practice in the Torah or New Testament. At the altar, the Glory is nearby. As long as we keep choosing death as the order of our existence, God directs some of those deaths to a higher purpose.

Yeshua, himself, went purposely toward death. Though many historical Jesus scholars allege otherwise, I would argue he knew his vocation, he chose his path, he accepted his destiny. He said so the night he was arrested and told his disciples in clear terms that he would be their Passover sacrifice. The New Testament not only affirms the Temple sacrifices, but understands Yeshua based on them.

14 Responses to Torah and New Testament, #4