What a Jew Needs from MJ 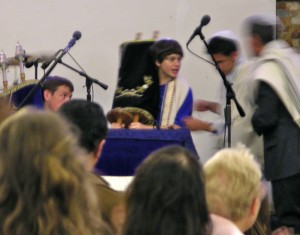 This is based loosely on the recent experience of a new friend of mine, a Jewish follower of Yeshua in a major city. Let’s call him Benjamin from Metropolis (it was hard to decide between “Metropolis” and “Gotham City”). Benjamin got in touch with me not very long ago to talk about faith in Yeshua. Benjamin had some years in the church and some years in mainstream synagogues, but zero years in Messianic Judaism. Having decided that faith in Yeshua is real and worth pursuing, Benjamin did not want to return to church and assimilate away from his Jewishness.

What should Benjamin do? After he decided to follow Yeshua, and with many vital questions and heart-wrenching concerns (we’re talking about people’s lives here), I could only recommend that Benjamin make the best of the MJ congregations in Metropolis. I knew, and told him in advance, that they were not very Jewish in practice. I had little idea how right I was!

Case exhibit #1: A very old and established Messianic congregation (you know, since the 1970’s, which we count as primordial) is in Metropolis. I knew this place was a Charismatic Christian Church using the label “Messianic Jewish.” That is what a certain large percentage of “Messianic” synagogues really are. But I also knew many Jews attended this place. I had high hopes.

Disappointment #1: There is no oneg at Metropolis Messianic. Oneg is the meal after service on Shabbat. It is customary to feed people and have social time over lunch on Shabbat. This is because on Shabbat, we don’t go to restaurants and services run long. It makes sense to eat together. But at Metropolis Messianic, everyone does go out for lunch to a restaurant, or they go home. There is a service and everyone leaves. So much for community. So much for being Jewish, which should at the very least mean, “We observe Sabbath.”

Disappointment #2: There is pretty much zero liturgy at Metropolis Messianic. It’s “Jewish” but there are few if any Jewish prayers.

Disappointment #3: There is pretty much zero Jewish education at Metropolis Messianic. When asked questions by Benjamin, the Jewish members know almost no Jewish terms. They have been living in a form of Christianity for decades now and forget what it means to be Jewish.

Big Disappointment #4: This one hurts to even write about. The yahrzeit comes for Benjamin’s child, who died as an adult. What could be more painful for Benjamin than the anniversary of his child’s death? He asks me, “Should I go to a mainstream synagogue where they will recite Kaddish and I can stand with the mourners?” I want Benjamin to be in synagogue and say Kaddish on the anniversary of his child’s death. But he calls Metropolis Messianic first to give them a chance. “No, we don’t do that,” said the congregational receptionist on the phone. And, yes, it was explained to them more than once that this was the anniversary of the death of an adult child. Metropolis Messianic, which is really not that large and should be more flexible to the needs of a person, doesn’t change their program for anyone. And Jewish mourners would do well to stay away.

Case exhibit #2, 3, 4, 5, and 6: Maybe Benjamin’s problem is that he stopped at six. After all, seven is God’s number. Maybe if he tried place #7 it would all come together. But exhibits 2-6 are all similar. They are all “Messianic” congregations with few or no Jews. I thought possibly some of them might do a better job of being Jewish than the actual Jewish leaders at Metropolis Messianic. I have seen gentile “Messianic” congregations that were Jewish in practice. Oh well . . .

Oneg: So far, none of the places Benjamin has gone to, driving more than an hour to get to some, have had oneg. They go to restaurants or home.

Hospitality: At one of them a famous Messianic speaker is coming (someone I respect, by the way). It is at least 90 minutes from Metropolis. Benjamin calls to ask if there is a possibility of asking someone to host him with some Shabbat hospitality over Friday night so he can be there for the event. “What’s that?” says the receptionist, “No, we don’t do that.”

The Label “Messianic”: It seems to be a niche brand that enables some independent teachers to attract a small but committed crowd. If they were called “Elm Street Slightly Jewish Charismatic Independent Church,” no one would come.

The Problem of False Advertising What do you call it when a restaurant says, “Authentic Italian,” and serves Chef Boyardee?

If you’re going to bother using the label “Messianic,” don’t you think you should know and practice Judaism to some degree (it’s a flexible concept and this does not mean being Orthodox)?

If not, what will you do when Benjamin calls?

How do we solve this problem? Well, for one thing, the few score of decent and actual Messianic Jewish congregations need to find some kesher (connection, cooperation, mutual excitement and goodwill for each other). We need some kind of brand recognition. TAKE NOTE: I will blog soon about some signs of life in Messianic Judaism, some organizations and congregations and people doing great things.

For another, I think some actually decent Messianic congregations suffer from identity-confusion, exhaustion from a lack of Jewish interest, and capitulation to a crowd that says, “Let’s forget about all that.” We need a vision check and recommitment to the meaning of Messianic Judaism.

And let me appeal to the groups who have no intention of being there for actual Jews but who use the label “Messianic” as if they do, in fact, exist for Jews: stop using the label if you don’t own up to it. Even if you are a group of mostly non-Jews and want to use the label “Messianic,” I could be okay with that if you sought to serve a Jewish person who came to you, if you practiced Jewish worship in some ways, if you could recite Kaddish with Jewish mourners, if you knew the difference between Kabbalat Shabbat and Havdallah, if you loved actual Jewish people.

COMING: More blogging about what good things are going on in Messianic Judaism. We’re small, but there are signs of life.

18 Responses to What a Jew Needs from MJ