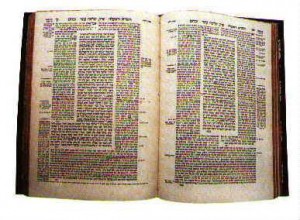 I said that the issue that matters in week 3 was, “We want to see a greater interest in Jewish history and culture.”

I encountered a perfect example of this need today on Facebook. On a Facebook page started by a friend and dedicated to Messianic Judaism, I encountered a typical anti-Jewish comment by an uninformed Christian. Note: hundreds of thousands of Christians are well-informed. This commenter was not one of those well-informed people. But I am not making general statements claiming that Christians are ignorant on these matters. I am merely saying a segment of Christians continues to misunderstand Jewish history, church history in relation to the Jews, rabbinic literature, and the kinds of things we in Messianic Judaism want our Christian friends to know.

Even more appalling is that this anti-Jewish comment came on a page with so-called “fans” of Messianic Judaism. I wonder if this guy attends an allegedly “Messianic” congregation.

I had posted a comment from my Daily D’var on the Facebook page, as I do every day. It was a comment related to John 12:37-43. I said:

The apostles and early Yeshua-community found in the scriptures a testimony of sayings relating to the life of Yeshua. The verses are used midrashically.

Huh? Midrashically? Why have anything to do with books that call Yeshua a bastard, a fornicator, and a sorceror?

Reconstructing the Commenter’s Chain of Reasoning

How did this uninformed, anti-Jewish commenter come to this opinion? Here is my guess as to his reasoning. Let me know if you think I am guessing wrong:

(1) He sees the word “midrashically” and this alerts him: the topic is rabbinic literature.

(2) He has read of the “Yeshu” passages in the Talmud (and perhaps something about the medieval “Toledot Yeshu”) which speak of Yeshua as the child of rape by a Roman soldier and a sorcerer who stole the name of God to use as the basis of magical deeds.

(4) Therefore he rejects all rabbinic literature as anti-Yeshua of-the-devil lies and errors.

(5) Therefore it is not at all possible that the apostles would have been a part of this steam of Jewish life or would have used any scriptures midrashically, as I had claimed.

(6) Also, therefore, Jesus-followers, whether Christian or “Messianic,” should avoid all things related to rabbinic literature.

I responded with three basic arguments. If there were a a greater appreciation of Jewish history and culture, I would not have to explain such things to people. If people spent a little less time on “World of Warcraft” and “Farmville,” perhaps they could improve their lives by reading a little history. I highly recommend Paul Johnson’s A History of the Jews. It is a very readable and relatively thorough treatment.

(1) Rabbinic Literature is not a unified voice.

Those who have not read Mishnah and Talmud and Midrash and the medieval commentators have no idea how diverse Jewish thought is. Many imagine that the Talmud is like a Bible, that all Jews read it daily, that the opinions are all in agreement, and that the whole thing is anti-Christian. But, if you actually read Talmud you will find it is a record over several generations of . . . not unified agreements and creeds to live by, but debates. Yes, the Talmud is the record of disagreements and compromises on what the practice of Torah should be. You will find numerous contradictory opinions and schools of thought in Talmud and other rabbinic literature. You cannot read the “Yeshu” passages as if these are the opinion of all Talmudic sages and especially not as the opinion of Judaism as a whole. There are many opinions.

(2) Rabbinic Literature does not reject Yeshua.

I worded this carefully and will stand by my wording. Feel free to attempt to prove me wrong. I have at least two strong bases for my statement: (a) Judaism and its formative literature reject the false anti-Jewish gospel that the Church was proclaiming and in many cases still is today and (b) the sages often came to positions and rulings favorable to Yeshua’s teaching and the practice of Messianic Judaism. As to the first, I have written about it many times, but the Church has been telling Jewish people that the gospel for us is to quit being Jewish, abandon our heritage, and to follow a Jewish Messiah by becoming un-Jewish! At the same time, the Church Fathers and even more so the medieval Church were denouncing Jews as devil-spawn, synagogues as brothels, and during some periods were imprisoning, torturing, and killing Jewish people in Christ’s name. I wish I mere making this up. It’s well-known history and you can find it easily in history books. As to the second point, it is also well-known that many of Yeshua’s criticisms of religion in his day are mirrored in the rabbinic literature. And mystical Judaism went on to affirm in many ways a view of God and distinctions within his nature that is compatible with the Father-Son duality of the apostles.

(3) We Messianic Jews need rabbinic literature (and Christians should be familiar with it).

There is no point in silly, self-made Torah observance. Many “Messianic” groups are down on rabbinic literature but style themselves as Torah-observant. Nonsense. The book of Judges was characterized by people being their own authority and everyone doing it their way. But Torah is about the nation keeping Torah together, with standards. Individual opinions need to be noted but brought into keeping with communal opinions. There is much room for diversity, but there is no room for abstaining from the conversation altogether and making autonomous rulings (out of ignorance). Christians should be more aware of Jewish history and that includes a familiarity with rabbinic literature. How can the Church ever relate to Jewish people when Jewishness is unappreciated and misunderstood?

What are your thoughts or questions about rabbinic literature? I am not setting myself up as the expert who can answer all questions as the biblical text is my specialty, not rabbinics. But I’d love to hear from you and I can try and provide direction, further reading, or perhaps answer simple questions.

This entry was posted in Jewish History, Judaism, Talmud and Tradition, Torah. Bookmark the permalink.