More on Steve in Ashkelon 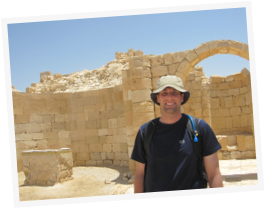 I reported last week about one of our congregants who is in Ashkelon, Israel, at the moment working on an archaeological dig. He is working a section of the Roman odeon/theater and mentioned a few mysteries they hope this season’s digging will shed light on.

It seems last Saturday, on a day commemorating the Six-Day War, he came near to a few Palestinian demonstrations. The Western Wall had to be briefly evacuated due to some stone throwers (it turned out to be just three men causing the stir).

Though he doesn’t post often enough (ahem!), you can check out his updates at http://stevepurtell.com/ by looking under the link “Ashkelon Blog 2011.”

This entry was posted in Archaeology. Bookmark the permalink.

1 Response to More on Steve in Ashkelon