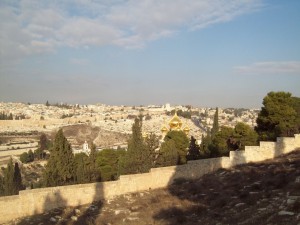 The Bible has prophecies of hope and a future of complete redemption, agricultural abundance, full knowledge of God, and many other joyful, hopeful thoughts. There are many labels we attach to these themes in the Bible. Popularly they tend to be called the end times or the last days or just “prophecy.” Yet the connotation of all those terms tends to be negative, bringing to mind scenarios of religious Christians being raptured (levitated up to Jesus in the sky) while the bad Christians and non-Christians are all left behind to get hailed on and burned up.

There are other terms for these biblical themes. Eschatology (too academic to appeal to most people). Aftermath oracles (a technical term which doesn’t inspire). Restoration oracles. The Restoration of Israel. Prophetic renewal. Future hope (not bad as a term, actually).

I like the term Zion theology and wrote about it here a few weeks ago. I like having the word Zion in the term because too many people are ready to divorce the future hope that the prophets of Israel and the apostles of the New Testament believed in from its specific center. That specific center is Jerusalem. What is it about Zion (Jerusalem) that so captured the imagination of the prophets and why should it be important to Jews and Christians?

There is a very ancient song in Exodus 15, right after the Israelites have crossed the sea. It uses archaic poetic language which sometimes causes even the critics to affirm it as a very old poem. And yet in vs. 17, it looks ahead to Mount Zion:

You will bring them and plant them in Your own mountain, The place You made to dwell in, O Lord, The sanctuary, O Lord, which Your hands established.

Did the Israelites prophetically sing of Zion, the mountain of God’s abode, when they had not yet even come to Sinai? I think so. Of course, you can always doubt it and assume the scribes added this touch later (cynic!).

It is, as I said in part 1, part of the theme that Mount Zion comes to replace Mount Sinai in importance (even before Israel gets to Sinai!). Mount Zion is the promise and Mount Sinai is the requirement.

Zion theology is a big theme. It is about God’s dwelling place. It is about national Israel being restored. It is about the nations of the world coming to know Israel’s God and the whole earth being renewed.

It is all too easy for Christians to neglect Zion theology. The New Testament only references Zion a few times. Think especially of Romans 11:25-29 and Revelation 14:1.

It is all too easy for Christians to assume a future hope that has little or nothing to do with Zion. The reason this is so easily done is that Christians forget the apostles would have all assumed that every follower of Jesus would know the Zion prophecies and believe them. The apostles did not constantly reiterate the centrality of Jerusalem because they assumed it.

Even so, don’t think the theme is absent. You might notice the importance of Jerusalem in Luke-Acts, for example. Luke views the spread of the multi-national Church as always stemming from Jerusalem and remaining in relation to Jerusalem.

What the apostles assumed later generations forgot. Recently, I read a comment on a Christian blog. “What does Jerusalem have to do with my faith as a Christian?” Oy!

I can’t remember where I saw it, but I also read a blog post by a rather academic writer, not some schlump, saying that the Second Coming will be to the whole world and that Jerusalem references need not be taken literally in that context. You know: Jesus will return to Tokyo, New York, Moscow, and London!

It is also all too easy for Jews to ignore or downplay Jerusalem. The secular Jewish vision gave Jerusalem back to the Muslims (who are destroying archaeological materials and who forbid Jewish prayer on the holiest site in Judaism while the world assumes the Muslim ownership of the Jewish Temple Mount is a fundamental Muslim right!). The anti-Zionist, religious Jewish position is, “Messiah will build Jerusalem so we don’t need to take action.” The middle of the road Jewish reaction is all too often, “Yeah, Jerusalem will be important someday.”

Zion theology, like the kingdom teaching of Yeshua (Jesus), says something different though. It says that our ability in the present to make the world a better place, to be the kind of God-followers that make a difference, depends on us having a powerful vision of the Jerusalem that is to come.

God dwells in Zion. The hope of all the earth, from the people of China to the people of Brazil and every other country, is in Jerusalem. The Redeemer is coming to Zion. God has installed his King on his holy mountain. Peace is coming to the world and it is coming to and through Jerusalem, the City of God:

They shall not hurt or destroy in all my holy mountain; for the earth shall be full of the knowledge of the Lord as the waters cover the sea.
-Isaiah 11:9