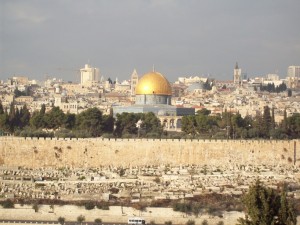 If you’re like me, President Obama’s words yesterday are discouraging [note: but see Rabbi Joshua’s comment and the possibility that I was wrong]. I know they’re not exactly anything new. But the world is so ready to tell Israel, “Give up Jerusalem.” No matter that when Jordan controlled Jerusalem all Jewish holy places were destroyed and desecrated. The whole attitude of the world is irrational.

It seems impossible to imagine a balanced and mature Judaism instead of the kinds of illness and unbalance we see in the present situation. We see Orthodox extremists who use power and terror to dominate in Israel. We see a fractured Judaism in which the people who don’t believe Torah practice some parts of it better than the ones who do. It is impossible to imagine a faithful, believing Judaism that combines the best of Orthodox and more liberal forms of Judaism to look like the Israelite prophets, to enact the kind of Judaism Heschel and others lived for.

But, then again, there was a time when the Christian Church used power and domination to commit atrocities and religion was synonymous with murder, corruption, and the worst kinds of evil (you know, the Middle Ages). And while Christianity may have a long way to go, getting the political power out of the hands of the Church has done the Church much good.

Maybe it is not impossible to imagine a Judaism that looks like Isaiah’s preaching and Yeshua’s life.

It seems impossible to imagine a day when Israel as a nation will have peace and when Jew and Arab will be friends.

But then, in the darkness of pogroms, in the horror of blind European anti-Semitism, it seemed impossible that Jewish people would ever have a place to be free. The birth of the State of Israel was and is a miracle.

Impossible things happen. I remember not so long ago when the imaginations of many Christians, Judeo-Christians, and Messianic Jews were stirred by a series of novels. In these novels, the Israelis and Palestinians discovered oil and became friendly. While the theology of the author, Joel Rosenberg, has some significant differences from my theology, the novels helped me envision hope.

No one could have predicted during the Middle Ages that one day the corruption and power of the Church would be greatly removed and alleviated, that the Church would become a voice from the lowly instead of the iron hand of tyranny.

No one could have predicted that “the Jewish Question” in Europe would have been answered by liberal Jews working together to found a state in the original Jewish homeland.

No one can fully imagine what Messiah’s love and peace will look like when Jew and gentile, Israel and the other blessed Middle Eastern peoples, Israel and the world, come together in the peace and redemption only God can bring.

But change does happen. And I believe in the agent of change. And I hope even in discouraging times. And times have been much more discouraging before.

This entry was posted in Jewish History, Life to Come, Zionism. Bookmark the permalink.

12 Responses to Israel and Impossible Things